I’m thinking of a vaguely Victorian-style tutu, looking much like this (screenshot from Patternmaster:Celebrations mockup screen 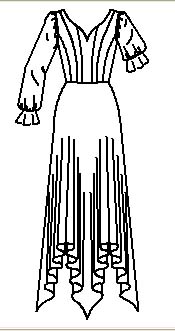 Naturally I would use the shorter sleeve depicted on the right, and also I would use a much shorter skirt (although still with the hemline depicted above).

I’m thinking of making it in white silk dupioni with a pink lace ribbon – not sure about the skirt yet, I may make it in white dupioni as well, but I’m not sure how it would drape – it really wants a drapey fabric, like an organza (I’ve got organza coming out of my ears as well) – but perhaps with a puffy tutu-underskirt to shore it up, it would work out well.

Regardless, I have LOADS of silk so I can experiment and see what I like, and what I don’t.

Now I just have to figure out boning for this baby…

I must say, Patternmaster: Celebrations is loads of fun.  I nearly sent it back earlier while trying to figure out the Pattern Editor (“nonintuitive” doesn’t even begin to describe it) but the ability to instantaneously see what different patterns/styles would look like is absolutely fantastic.  I love it!