You are here: Home / All blog posts / Trapeze
Previous post: On choosing adventure
Next post: Harassed by an SUV

I spent most of my free time this week building a trapeze (bad me: I should have been sewing tutus!).  This is essentially a device that elevates the warp so you can hang weights on the end; the weights provide tension, making it easy to wind the warp onto the back beam under even tension = much nicer warp when weaving = fewer skips (I hope!).  At least, that’s the theory.

Anyway, I took the trapeze plans from Kati Reeder Meek’s book Warp with a Trapeze and Dance with Your Loom.  It’s quite a simple device: 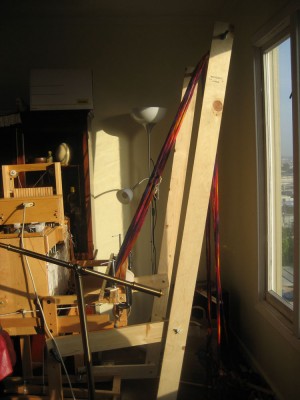 As you can see, it’s basically two long pieces of wood clamped to the back of the loom, set at a slight angle (so the weights and the winding-on warp don’t interfere with each other) with a cross-bar at top.  The warp attaches to the back beam, goes through the raddle, up and over the bar, and down to the bottom, where it is weighted (I used the lead bars from ankle weights, secured with a slip knot).  I had wound nine separate warp bouts, so I used nine weights (it would have been much less of a pain had I wound fewer bouts, but my warping board doesn’t have the capacity for larger bouts).  Because I was winding on with stripes of different colors, I used two end sticks and two sets of lease sticks.

Lease sticks!  I forgot to mention that you leave the lease sticks in while raddling, and move them up and over the bar to “comb out” tangles and help spread the warp.  Makes winding on a breeze.

Anyway, once your weights are on and the lease sticks in place, you take another longish piece of wood and “spank” the warp, whacking the long piece of wood against the warp crossways again and again, in every exposed spot, until you get nice, even tension.  (The “spanking” helps even out tension across the warp.)  Then you begin winding onto the back beam.

Once the weights are as far up as they can go, you tie another slipknot near the bottom, insert the weight (keeping tension on the bout the entire time), move the lease sticks down, and presto! you’re good to go.

This would be going much faster except that there are white spots where I tied the choke ties too tight on the painted warp, so I’ve been stopping and coloring in the white sections with permanent markers.  Fortunately I do have magic markers that more or less match, but the spots are still quite visible, though not quite as obvious as if I’d left them pure white.  Chalk one up to experience.  When I’m making the outfit (assuming I finish in time, which is not at all clear) I’ll make sure to cut around those glaring flaws.  Unfortunately, there’s no way to avoid having them show in a shawl.

Anyway, I highly recommend Kati’s book, so if you haven’t yet got a copy and want to try a trapeze, try ordering it!  It’s a short booklet, easy to read, and provides very clear instructions.  Or, you could just copy mine – it isn’t hard.

I have now got bronchitis AGAIN, making it dubious whether I can ride 80 miles today.  It’s bad enough that I’ve been taking codeine cough syrup just to get some sleep at night – still not sleeping well.  Went to see a doctor, she thinks it’s allergies.  I’m dubious – never had allergies in my life and was fairly extensively tested 2-3 years ago.

Anyway, I hope it clears up soon.