I’ve been debating over the last several months over what I should name my AVL Workshop Dobby Loom.  Leaving it unnamed is simply not an option; I’m the sort who names anything that seems significant, especially if it’s complex enough that I’m likely to be negotiating, arguing, shouting at, etc. it.  (Though I rarely shout at my equipment; I believe it’s rude to shout at anything, even if it’s nominally inanimate, and besides, it startles the cats.)

At any rate, I’ve decided to christen her Sophie, as a tribute to the famous female mathematicians Sophie Germain and Sofia Kovalevskaya.  Both contributed significantly to mathematics and/or physics, and both managed to succeed despite overwhelming odds in a male-dominated (and very sexist) world.

Sophie Germain may also have saved the life of Karl Friederich Gauss, one of the most illustrious names in number theory.  Wikipedia has this to say about the story:

In 1804 she began corresponding with Carl Friedrich Gauss, again using her pseudonym, after reading his famous Disquisitiones Arithmeticae (1801). He eventually learned her true identity in 1806, when Napoleon Bonaparte was invading Prussia and Gauss’s birthplace, Brunswick. Fearful that Gauss would meet a fate like that of Archimedes, Germain requested that General Pernety, a friend of hers, personally ensure Gauss’s safety. The general explained to Gauss that Germain had asked that he be protected, which confused Gauss since he had never heard of her. She then wrote to him admitting she was female, to which he responded:

But how to describe to you my admiration and astonishment at seeing my esteemed correspondent Monsieur Le Blanc metamorphose himself into this illustrious personage who gives such a brilliant example of what I would find it difficult to believe. A taste for the abstract sciences in general and above all the mysteries of numbers is excessively rare: one is not astonished at it: the enchanting charms of this sublime science reveal only to those who have the courage to go deeply into it. But when a person of the sex which, according to our customs and prejudices, must encounter infinitely more difficulties than men to familiarize herself with these thorny researches, succeeds nevertheless in surmounting these obstacles and penetrating the most obscure parts of them, then without doubt she must have the noblest courage, quite extraordinary talents and superior genius. Indeed nothing could prove to me in so flattering and less equivocal manner that the attractions of this science, which has enriched my life with so many joys, are not chimerical, [than] the predilection with which you have honored it.

I almost named her Ada, after the famous Ada Byron, the daughter of the famous poet Lord Byron and writer of what is generally considered the first computer program (predating computers by over 100 years, of course, but using the same algorithmic methods as a computer program).  An early programming language, ADA, was named in her honor.  It would have been highly appropriate for a compudobby loom, but I come out of mathematics, not computer science, so I wanted to recognize a female mathematician.  It was hard enough being a female mathematician in the late 80’s, when I went to college; heaven only knows how difficult it must have been in the 1800’s!

The difficulty (if you will pardon the digression) of being a top female mathematics student was the sheer isolation of being the only woman in the metaphoric room, of having to represent one’s gender and prove oneself all the time.  At Stanford, I was the only woman among 30-odd people taking the Putnam exam (the most prestigious college math competition in the United States) my freshman year.  I was one of very few women in mathematics at Caltech (which was itself only 13% female).  And I think I was the only woman to have been on a winning/honorable mention team on the Putnam exam, my senior year.  (I made Caltech’s team – making me one of Caltech’s top three scorers – my senior year, and we placed in the top 10. )  One of the reasons I dropped out of mathematics, aside from my major bout with bipolar disorder at the end of my first year of graduate school, was that I simply couldn’t take the isolation much longer.  I needed to know that I was not the only one of my kind in the room.

Which is one of the reasons I am building Weavolution.  Weavers as a whole are an isolated bunch, partly because there are so relatively few of us compared to, say, knitters – but also because floor looms are not portable; it’s not possible to have gatherings where weavers get together with their looms and chat while weaving.  By its very nature, it’s a solitary profession, and I think that makes it harder to be a weaver.

It also makes it more difficult to find mentors.  I am lucky to live in an area with a number of active guilds, but Weavolution has received dozens – possibly hundreds – of emails from weavers who say they are the only weaver in their area, and there is no one else with whom they can socialize, discuss weaving, etc.  There is no one they can go to for inspiration – except for a few mailing lists – and they are hungry for that kind of social interaction, to meet others, to know that they are not the only ones of their kind.  We’ve got over 200 members on our mailing list already, and most of them say that’s why they’re joining.

So that is my contribution to the world of women and learning.  I hope other weavers find more support and camaraderie in Weavolution than I did in the world of mathematics, and hopefully it will inspire them to be more ambitious and far-reaching.

Meanwhile, here is a photo of the newly christened Sophie! 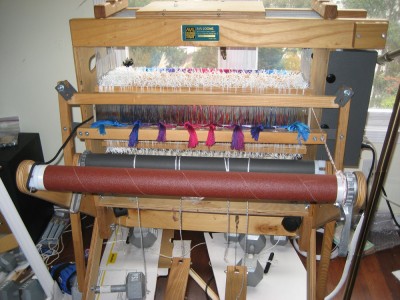