Today was a whirlwind of weaving study!

I woke up with the dawn this morning, as always, and tiptoed down into the studio to check out the sample books Laura had invited me to look through.  These were mostly sample exchanges from Complex Weavers, though she also had a huge pile of various handwoven samples of her own.

The samples are just amazing.  I recently joined two of the Complex Weavers study groups (the Garment Study group and the Fine Threads study group) and have been befuddled by the wealth of information and examples in the two sets of samples I have received so far.  But Laura has half a bookcase full of samples!!  Paradise for the novice weaver.

Two of the samples caught my eye, and I took photos: 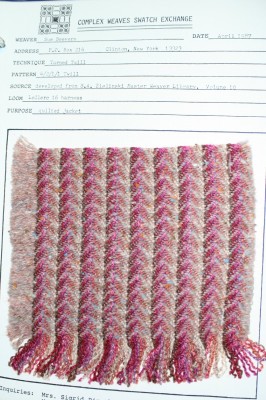 This one interested me because of its use of color.  It’s not what I would call a particularly exciting structure (it’s a twill variant) but it looks much more complex than it is because of the striping in the warp.  I’ve filed it away so I won’t forget this particular “take”; I liked this fabric a lot and would like to use the tactic in my own work.

And then there’s this one:

This one interests me because it doesn’t have the half-tones and blockiness that I associate with overshot!  Using 14 shafts instead of four allows more pattern design possibilities.  I had seen small samples of overshot on more than four blocks, but this really intrigued me.  I may try some more of this once I finish the wedding-dress project.

After Laura got up, she had me weave on the big AVL for awhile.  That was neat!  It’s a MUCH more solidly built loom than mine – the beater required considerable muscle to move back and forth, and some care to keep it from “bouncing” at the back end of the stroke.  The auto cloth advance was neat as well – basically it advances by the width of one pick every time you bring the beater forward.  It’s much like the perpetually-sunny California weather – you don’t notice anything for awhile, and then suddenly you realize that you’ve woven six or seven inches without having to advance once.  And Laura has an air-assisted lift on her AVL – which I can totally understand: having to lift 60″ shafts would get really heavy really fast if not for the air assist!  Still, it was a thrill to be able to raise the shafts with a tap of the pedal and lower them by lifting my foot.

Then she showed me how to beam a painted warp onto a sectional beam (hint: you treat the sectional beam more or less like a plain beam).  I’ll write more about that tomorrow morning – I took lots of photos, if I had Dreamweaver right now (which I don’t, since my laptop died) I’d post photos of the process on my website.

After lunch, she got me weaving on the 4-shaft Fanny loom.  That was a real struggle.  I’ve been weaving on a computer-driven dobby loom for the last 2 years or so, and the two-treadle method is woven solidly into my muscle memory.  The right treadle lifts the shafts, the left treadle lowers them.  Two treadles for every pick.

Now, of course, it was 1 treadle for every pick, and worse, there were SIX treadles to contend with!  Two were tabby and the other four were pattern, so I only had to track four.  I can barely remember the days when I could effortlessly control 10 treadles on my Baby Wolf!

Anyway, after about an hour of struggling with the Fanny, Laura came by and videotaped me for about sixty seconds, then gave me some advice on ergonomics.  (I’ll write more about that later; I want to do a little more weaving tonight.)  I spent the next hour or two trying my best to adjust my weaving to her suggestions – difficult for me because my old techniques were so deeply ingrained.  It was like trying to relearn how to breathe.  (As my old Tai Chi instructor used to say, “Practice doesn’t make perfect – it makes PERMANENT!”)

So that’s where we are now, around dinnertime.  After dinner we’ll work on repairing some of the many flaws in the silk dress fabric, to prepare it for wet-finishing.  And tomorrow morning I will try to put up a lot of the photos that I took during the warping process, and maybe a video or two from the ergonomics part.

Whee!  This is such fun.  And it’s wonderful getting to meet (and study with) Laura!