You are here: Home / All blog posts / Back to work
Previous post: Flying home
Next post: Sweet success

I spent Monday contending with a venomous mix of poison ivy and jet lag – itchy and exhausted is no way to work! – but I managed to get the sample warp wound and beamed on, ready for threading.  I’m hoping to be weaving on it by end of day on Thursday – a bit ambitious considering it’s 23″ x 72 ends per inch = 1500+ ends to thread and sley, but quite do-able, I think.  (Assuming this poison ivy EVER stops itching!)

Meanwhile, a friend is coming over this afternoon to learn how to make fudge.  It’s not actually that difficult, but I have a few tricks that make it easier.  Primarily, I replace half or all of the milk with cream, resulting in a much denser, richer fudge that is less prone to early crystallization.  It is softer than conventional fudge, though, so not as good commercially, so you won’t see it in commercial fudges.

We’re going to make plain chocolate fudge, which is of course something of a misnomer when working with something as good as Valrhona chocolate.  I’ve taken my standard recipe, scaled down to make somewhat less fudge (about 3-4 lbs as opposed to 6+ lbs), and we’ll play around with some variations.  I want to see what happens  if you replace cream with milk, and what happens if you “spike” the fudge with even more cocoa than I usually do.  I’m guessing that adding cocoa tightens up and hardens the fudge (partly because the acids in cocoa powder tighten up the milk proteins) and that replacing cream with milk will also make the fudge harder.  I’m hoping  to get at least two batches in this afternoon.

Here is a photo of the bobbin lace samples:

They go from top to bottom, left to right.  You can see pretty clearly (despite the blurry photo) that the quality of the work increases drastically from the first sample to the final one – by the end I was starting to get the hang of manipulating the bobbins, and it certainly shows!

It’s hard for me to believe that these three little strips of lace are all I have to show for the approximately 15 hours I spent on them during vacation, but then of course I spent most of the first 10 hours making mistakes and laboriously correcting them, so I spent nearly as much time unweaving as I did weaving.  Hopefully the later pieces will go faster.

I’m debating what to do next after I finish threading up the sample.  I would really like to do one more sample for my article for WeaveZine, and since I recently acquired a small table loom, I could try setting that up and weaving it in parallel with the sample for the dress fabric.  On the other hand, it might actually be faster just to wait until the dress fabric sample is complete and then warp up the floor loom again.  I’m not accustomed to doing two weaving projects at a time, so the prospect of two at once kind of boggles my mind.  I think I’ll wait and see.

And, finally, here are photos of the parasitized caterpillar, and the emergent roundworm.  I am still ASTONISHED that 8 roundworms (or more!) fit inside this poor little caterpillar. 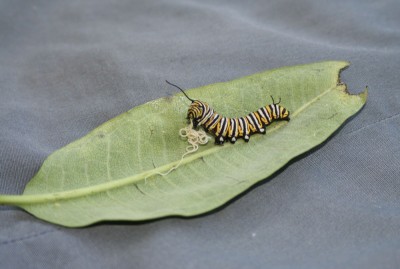 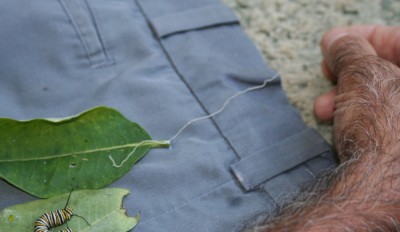