Time for a quick dress update! 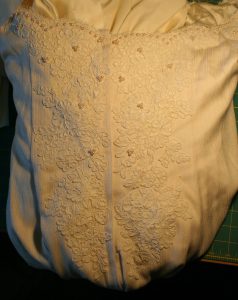 I also had a friend machine-embroider labels for me.  Here is one: 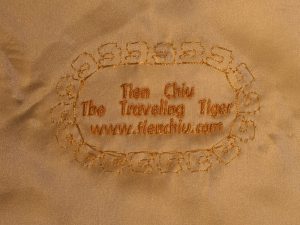 So now I am working on hemming both linings, and finishing up the pearls on the sleeves.  After that, we need to close up the back lining, put in a hook-and-eye at the top, sew in the label, and…unbelievably…DONE!!  Miraculous as that seems…

On the coat, we need to finish the bottom left corner, hem the sleeves, catchstitch the facing to the dress along the seam, hem the lining, and put in the hook-and-eye closures.  Then we’ll  be ready for the ceremonial sewing-in of the label.  (I feel like I should play the Olympic theme and extinguish a flame once complete!)

Many thanks to all for the suggestions on what to pursue next in my fiber arts education.  While I’d love to take classes, it’s just not in the budget before the wedding (for obvious reasons), so I’ve ordered copies of both the design and color theory books.  I think once I’ve read and absorbed those, I’ll have reached an advanced enough level that either formal classes or private tutoring will be very useful for me.

Oh, and Mike and I found a jeweler to make our rings!  Her name is Carol Mortensen (no website, sorry!) and among other things, she does carved rings.  She had a beautiful one with three Chinese dragons on it, which we liked very much – though we’re currently leaning towards a slightly different design, one with a Chinese dragon and phoenix facing each other at the top of the ring, with some sort of round thing (traditionally, a flaming pearl) set in between them.  I’d like my “round thing” to be a small diamond, but we haven’t really settled on that, yet.  We’re scheduled to meet with the jeweler tomorrow evening to firm things up a bit.

Interestingly enough, Carol-the-jeweler is also a former weaver!  She has an old-style (wooden cards with pegs) jacquard loom and a drawloom that she is interested in selling.  So if you have an interest in either, drop me a line or leave me a comment here, and I’ll forward on appropriately.