You are here: Home / All blog posts / The French Laundry
Previous post: Lyocell and laundry
Next post: Changing weave structures

We got up and on the road early yesterday morning, leaving the house around 8:45 am.  Google Maps said it was only an hour and forty-five minutes to Yountville, CA (home of The French Laundry), but I was taking no chances on traffic.  As it happens, we arrived about forty minutes early for our 11am reservation, and I spent part of the time walking in their vegetable garden, across the street from the restaurant itself: 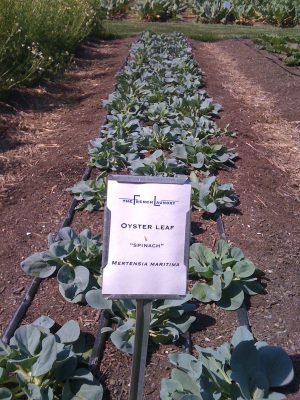 Garden at The French Laundry

At 11am on the dot, they ushered us into the main dining room – the biggest room in the restaurant, it had only six tables!  (There are only 14 tables in the entire restaurant – full capacity is 62 people.)  They brought us the menu, which had a regular nine-course tasting menu and a vegetarian version.  Here’s a .jpg of the “regular” menu.  (I unfortunately forgot to ask them for a souvenir menu to take home, but they had a .pdf on their website).

(As you can see, it’s not for the faint of wallet.  On the other hand, the food is out of this world, and I’d rather have two hours of magnificent dining experience than a mediocre weekend trip out of town.  Although, if you asked me to compare it to a Fireside rotary temple – what I’m currently lusting after – I might have to stop and think.  😉 )

The food was fantastic – no, beyond fantastic – a work of art, both culinary and in presentation.  The royal ossetra caviar arrived on a little “log” of crispy phyllo dough stuffed with egg (and something else delicious), and adorned with tiny little flowers – delicate and perfect.  I so wanted to take a photo of it, because it was so beautiful, but I just don’t believe it’s appropriate to whip out your camera phone and take shots of the food while dining at the best restaurant in the country.  It seems, well, tacky and touristy, and despite the people at the next table enthusiastically snapping away, I couldn’t bring myself to do it.  Each dish was creatively conceived, perfectly executed, and impeccably presented – beyond that, words simply won’t do.  Writing about food is like dancing about poetry.  Some things don’t translate.

I’m pleased to report that The French Laundry does have a sense of humor, despite its eminent status.  Here, for example, is a photo of the lamp in the bathroom:

If I read this lampshade correctly, The French Laundry may be washed and ironed, but not bleached.  (The same set of international fabric care symbols appears on all the lampshades, not just in the bathroom.)

In addition, the napkins arrive with a clothespin on them (I wish I’d thought to take mine – they were plainly meant for souvenirs), and the logo for the restaurant is a clothespin.  The service is impeccable – the waiter told me later that there were approximately forty people dedicated to the front of the house.  (And this in a restaurant with only 62 seats!)  When the food comes out, even a table of ten doesn’t have to wait for the servers to shuttle back and forth: they simply send out as many people as needed to serve everyone simultaneously.  (I saw a conga line of eight servers (well, okay, they weren’t doing the conga 😉 ) going up the stairs for a particularly large table.  It was impressive!)

One of the most delightful things about dining there was the “extras”.  Sure, there were the dishes on the menu, and they were glorious.  But there were also canapes at the start: a tiny puff of pate a choux, deliciously crisp and flaky on the outside, full of wonderfully gooey melted Gruyere cheese on the inside – no more than half a bite, it was gone before I knew it.  After we finished oohing and aahing  over that, the salmon cornets appeared – smoked salmon tartare, chopped, a tiny scoop sitting like an ice-cream cone over a small cornet of sesame seed tuile filled with deliciously tangy onion cream.  In between courses, we got wonderful little mini-loaves of bread, accompanied by two kinds of butter and three kinds of salt (including a pink salt that came from a copper mine!).  Between dessert courses, they brought out an amazing little cake – no more than two inches across, it was a vanilla sponge cake with creamy banana mousse inside – light, airy, creamy, and melt-in-your-mouth delicious.  The waiter set it down and wished us a happy anniversary.  Indeed!

Finally, two and a half hours later, we finished the last course, and were offered the mignardises.  These are more “extras” to finish the meal – six chocolate bonbons, a small dish full of chocolate covered macadamia nuts, and a coffee semifreddo that was just to die for.  I ate the peanut-butter-and-jelly chocolate, and OMG it was amazing.  Jam in the top, creamy peanut ganache in the bottom, and bits of crunchy, tangy salt scattered throughout.  It was one of the best chocolates I have ever tasted anywhere, in a long and thoroughly decadent life of tasting quality chocolates.  And the chocolate macadamia nuts weren’t just your standard: they had been coated with a very light coating of toffee and salt before being rolled in chocolate – crispy, crunchy, sweet and tangy all at once.  Perfection.

However, by this point, having been eating continuously for two and a half hours, I didn’t feel hungry enough to do justice to the mignardises.  So I asked if we could take them home.  They not only gave us a box with the mignardises, they threw in some delicious shortbread cookies as well!

Here are the “leftovers”:

All in all, a thoroughly enjoyable and delectable experience.

And, because I am a weaving geek, I must mention that The French Laundry does not have conventional napkins!  They are woven in a houndstooth pattern around the middle section, and what superficially looks like a twill in the center.  But it is not a plain twill – if you look carefully, there is some kind of rectangular patterning in the weave.  I begged a favor of them and took a napkin outside for the best in camera-phone photography.  And here they are: the French Laundry napkins!

Happy anniversary to us!