You are here: Home / All blog posts / Second sample, reverse side
Previous post: Phoenix Rising sample warp, round 2!
Next post: A new tack

I cut the second sample off the loom this evening. I was having some technical problems with the weaving, and after getting help from WeaveTech and Bonnie Inouye, decided I needed to cut off and re-sley the warp. So I’m midway through that process, but did get a lovely shot of the reverse side of the sample: 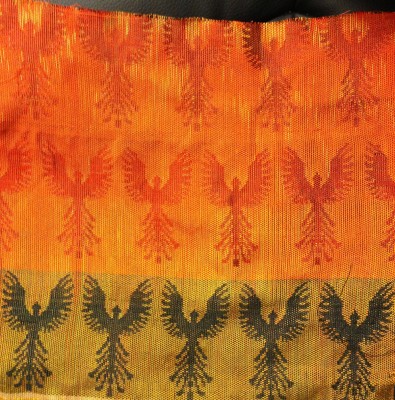 There are two interesting things about this sample. First, the middle set of phoenixes look beautiful on the reverse side – which is great since I also like the way they look on the front side. I think I will use this weft for the next set of samples. It’s a very fine tram silk that I bought from John Marshall, dyed with Cibacron F Scarlet at 4% weight of goods. I don’t have enough of it for a full piece, but I just finished dyeing and winding off a second skein, and that should be plenty.

Second, the top row of phoenixes is really exciting. The background is the section where I bound off the warp, so there are some parts that are orange and some parts that are golden yellow. The variegation is gorgeous and captures the idea of an inferno. It tells me that I’m on the right track with my idea of painting/airbrushing the warp before weaving. I’m really looking forward to playing with that section!

The last thing I’ve been doing (besides writing posts for the book blog, of course) is winding skeins of fine silk onto bobbins for storage. I’m talking about 140/2 silk and tram silk, both of which can be fussy and difficult, so I was very pleased to wind an entire 45-gram skein of tram silk in just about 45 minutes, with only a few knots. Usually it takes about an hour and a half to wind off one-third of a skein before hopelessly tangling the rest, so this was really good. Either I’ve figured out how to handle tram, or I got really lucky. I’m thinking it’s luck, but I have my hopes!

I’ve also glued together my Tinkertoy swift in strategic places. It is awesome for winding off very delicate yarns, but tends to come apart in the areas under stress while unwinding. So I glued some of the bits in place. Tomorrow I’ll try the second skein of tram and see how my luck holds out – maybe lightning will strike twice, and it will unreel smoothly. That would be most excellent!