I couldn’t possibly have left Colorado without a visit to Schacht Spindle Co, which is the biggest U.S. manufacturer of weaving and spinning equipment. So my friend Alison and I went for a factory tour.

We started at the beginning: with wood. Schacht buys wood by the semi-truckload, then lets it acclimate in this area of the giant warehouse that is their factory:

They use mostly maple, with some cherry and walnut. (The cherry mostly goes into their Schacht-Reeves spinning wheels, but they occasionally make looms out of it, too.) The wood arrives rough, then gets cut to specifications, and the edges rounded as appropriate.

Next step was the router. Here’s the jig for their 15″ end-feed shuttles:

It was fascinating to see a shuttle in its nascent stages, just a groove in a piece of wood.

For ease of manufacturing, some parts are manufactured in pairs. Here’s a pair of pieces for a Wolf trap – a device used on their “Wolf” looms, fortunately, not something deadly to animals! The pieces are symmetrical and will be cut apart in another step.

After creation of the pieces, the next step is assembly. Here’s the wheel part of a spinning wheel being assembled:

Because clamping the individual bits together would require a ton of space, Schacht uses jigs to hold the wheel parts tightly together while gluing. In the photo above, a shim is being inserted to ensure a wheel part stays in place.

Here’s another photo, this time tapping down a shim: 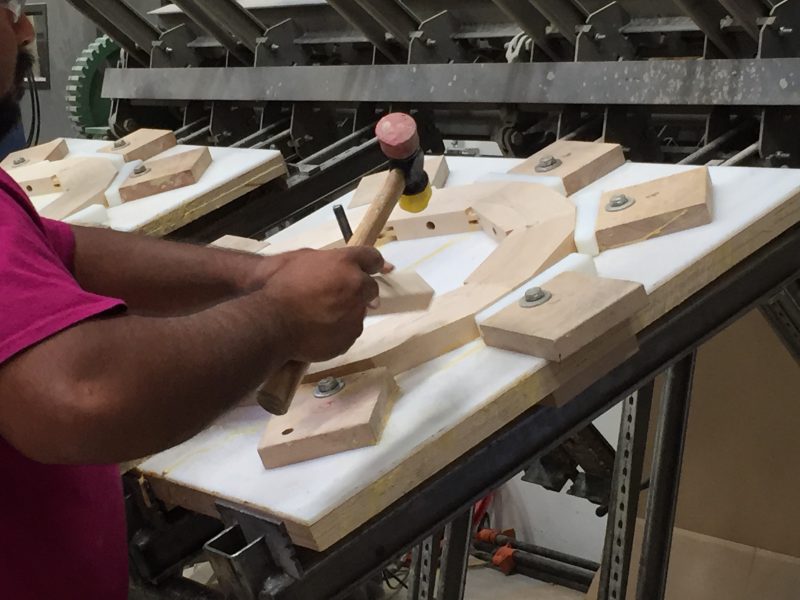 wheel for a spinning wheel being assembled

Here are some of the glued-together wheels:

Schacht also has a CNC machine, which is used for some of the more complex cuts. Here are some nascent end-feed shuttles which have been roughed into shape:

Once pieces are finished and sanded, they go to the finishing room, where they are dipped in a vat of finishing compound (polyurethane) and then rubbed down to ensure a smooth, even finish. Here a worker is rubbing down part of a spinning wheel:

Some of the pieces require specialized equipment, so they are outsourced to specialist manufacturers. This is a part made from laminated plywood – many thin sheets of wood are glued together, steamed, then formed into shape with a mold.

Here’s the same piece, being assembled into a spinning wheel:

And here is a fully-assembled wheel:

Here’s a loom being assembled:

Here are some completed looms being prepared for shipping. They are placed on cardboard platforms, then slid into a shipping box later:

No spinning wheel is shipped until someone has actually spun on it, to test the mechanics. This Schacht-Reeves wheel is done, and awaiting its final testing. 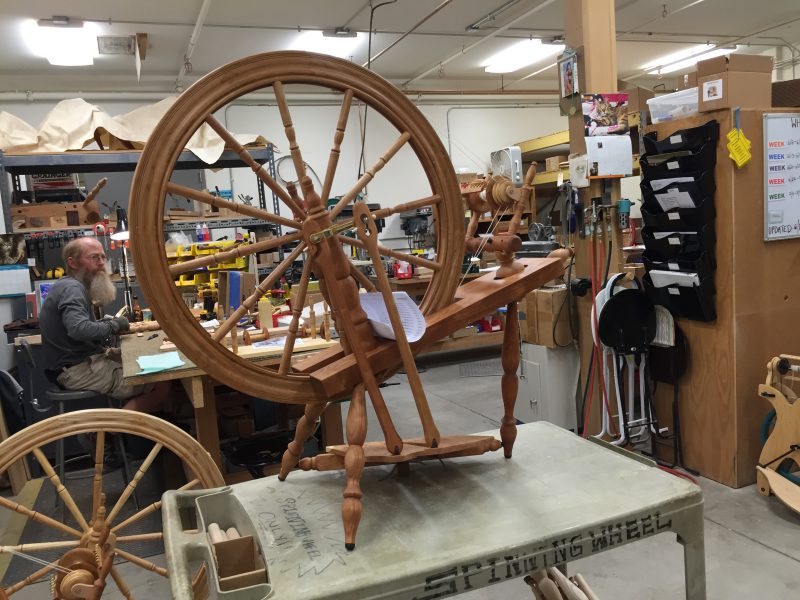 Our final stop on the tour was the Schacht showroom, which has demo models of all their products. Being a weaver, I naturally gravitated towards the looms:

As we left the factory, we encountered something we hadn’t expected: chickens!

It turns out they belong to the workers: Schacht gives them both a community garden space and the opportunity to keep their own chickens in the company coop. Who would have thought of fresh eggs as a bonus for working in a spinning and weaving factory?

My tour was fascinating, but you should really take your own. Tours are by appointment, so contact Schacht to schedule yours!

And, finally, I’ve been missing our wonderful cats. So Mike has been giving them daily belly rubs and cat treats for me, and sending me photos of them to alleviate severe cat deprivation. Here’s Tigress, posing with her namesake. Could we call it “A Tale of Two Tigers”?