You are here: Home / All blog posts / Back to weaving!
Previous post: Presenting the 2016 fall collection
Next post: Weaving the scarves

Chocolates are done, packed, and shipped. Which means it’s time to WEAVE!

I started with three days of loom repair: diagnosing and fixing some heddles that were not lifting properly. On a TC-2 loom, that is quite an exercise, especially if you are as short as I am. Fixing a nonfunctional heddle means means lifting off the loom cover, disconnecting vacuum hoses and electrical jumpers, and then pulling some fairly heavy widgetry straight up to get it out of the frame. If you are six feet tall, this is mildly annoying but quite do-able. If you are five feet tall, you will spend a lot of time awkwardly teetering on chairs and ladders and praying you don’t fall off or drop anything.

Fortunately for me, I live with a Tall Person. So after Mike found me kneeling precariously on the very top of a stepladder, leaning way into the center of the loom while trying to vacuum out some heddles with a handheld vacuum cleaner, he volunteered to do the Tall People Stuff. With Mike’s help, I got everything finished quickly and started weaving samples for Kathy’s dragon-and-phoenix scarves.

Here are the samples as I was weaving them:

In theory, since the warp is set up for triple weave, I could weave nine scarves simultaneously – three scarves across the width, three layers deep. Whee! That would definitely qualify as Extreme Weaving. Someday I will try it, but not today.

Here’s a pic of the shuttle herd grazing placidly on the cloth:

I also had to get a bit inventive about temples. Weaving temples are used to prevent problems at the edges of the cloth. Specifically, they are used to hold the edges of the fabric out at the full breadth of the warp, to prevent the edge from drawing in towards the body of the cloth – and thus becoming denser and potentially problematic. There are several ingenious designs for temples, but most of them don’t work well if you’re weaving three narrow warps side by side. So I was going to have to improvise something.

Fortunately, many cultures have had to solve this problem, usually in very low-tech ways. Deb McClintock documented the Southeast Asian weaving temples on her website, and I was able to use this design to make some bamboo temples of my own. Here’s one in action:

And here it is by itself:

As you can see, it’s pretty simple – a length of bamboo with two sharp points (in this case, sewing needles bound to the bamboo using artificial sinew/glue/tape). The wood should be a little longer than the desired width of the fabric. One bends the bamboo, then slips the sharp points into either side of the fabric. The wood straightens a little when you release it, holding the fabric edges apart from each other.

This kind of temple is too delicate to work for rugs, but for my scarves, they’re doing very nicely. For the wood, I bought some extra-thick, 36-inch bamboo skewers meant for making S’mores. They’re available on Amazon quite cheaply (search for “Jungle Stix”), and I imagine this set of 100 will make me all the bamboo temples I can ever use. Of course, any other kind of flexible wood will work, too.

After all that fiddling, I wound up with these lovely samples:

And here’s the back side (please ignore the messed-up sections):

For weavers – the bottom part of the sample is an 8-end satin at 30 epi, the top part is a 5-end satin at 30 epi. I would really have preferred a closer sett, but 30 ends per inch is unfortunately all I’ve got. So the scarf is very weft-dominant. However, it still has nice drape, so all should be well.

I have now finished all the fiddling and adjusting and am ready to weave the Actual Thing. That will likely take a couple of days, so I will probably finish early next week.

And what does Tigress think? Well, weaving means Mommy’s off in the garage, so she can’t play fetch or hand out cat treats. Bo-ring!! 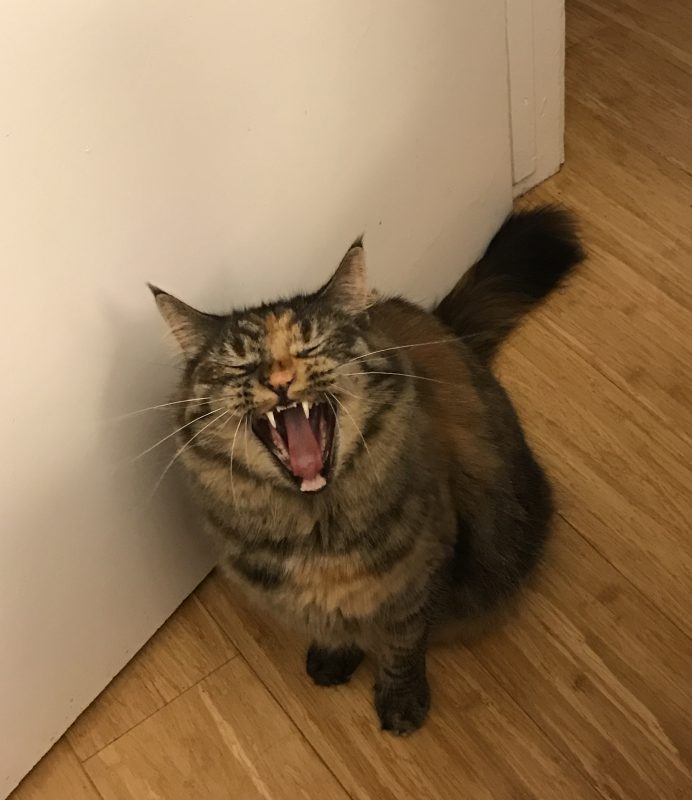