You are here: Home / All blog posts / Tie-dyed rebel
Previous post: Problem-solving sure beats procrastinating!
Next post: Another dye cube, and some thoughts on color mixing

The last few weeks have been extraordinarily busy but also depressingly lacking in any creative work. The executive director at the San Jose Museum of Quilts and Textiles decided to move on to other opportunities, so resigned her position early last week. Since I’m the President of the Board of Directors at the Museum, that means most of my time has been spent dealing with Museum logistics and preparing for the search for a new ED. So, lots of activity, but nothing interesting on the creative front.

Which is why I finally rebelled and decided to do a tie-dye marathon. I spent one entire day tying interesting patterns into twelve garments: eight shirts, two dresses, and two pairs of leggings. Then I soaked them in soda ash and let them sit until they were completely dry. Then I spent another half-day yesterday carefully applying dyes, and washed out the dye today. Here are the results, with commentary.

I’ll start with the attempts at an eight-pointed lotus design:

Here are two “lotus variants,” one in leggings and one in a dress.

I was a bit obsessed with doing lotus/mandala designs. I think I tied them correctly, but I may not have applied the dye in the right patterns to get an eight-pointed design. Next time I will try again! But they are not failures in any sense of the word – I love them!

You’ll be glad to know that I did eventually get bored of tying mandala patterns. Here’s a shirt that I call “Sunset in the Valley”:

And here is a shirt that was folded in half lengthwise, then folded in a spiral design, resulting in two symmetric half-spirals. There is too much black in this shirt for my taste, but I love orange and yellow, so will probably wear it anyway: 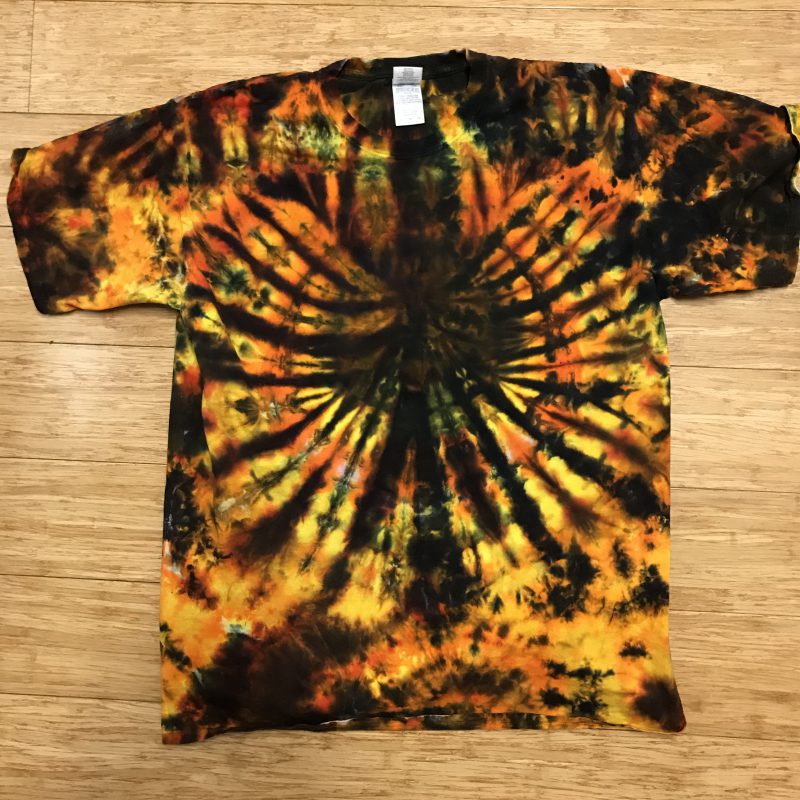 And – as a reward for reading all the way down – here are my two very favorite shirts. The first one I’m calling “Galaxy” – it’s a fairly common tie-dye pattern, but I threw in some additional stars and planets to make it more intriguing:

And here is my favorite of all: a rainbow “spider” pattern. This is created by folding a T-shirt in half lengthwise, then coiling it in a spiral to give a symmetric half-spiral pattern.

Tomorrow and Sunday I’m taking a much-needed rest break from Museum affairs, and going to an intriguing workshop instead. Chris Palmer, the author of the origami-in-cloth book Shadowfolds, is teaching how to combine the origami methods in Shadowfolds with arashi shibori to produce some very interesting and beautiful pieces. Pix when finished, of course!

Finally, because it has been far too long since the cats have graced this page, here are two pictures of the lords of the household:

And that’s it! More in a day or two, after the workshop is done.

Previous post: Problem-solving sure beats procrastinating!
Next post: Another dye cube, and some thoughts on color mixing