You are here: Home / All blog posts / Composing chocolate flavors
Previous post: Your normal is not my normal: Why people misunderstand mental illness
Next post: Tien 1, common sense 0 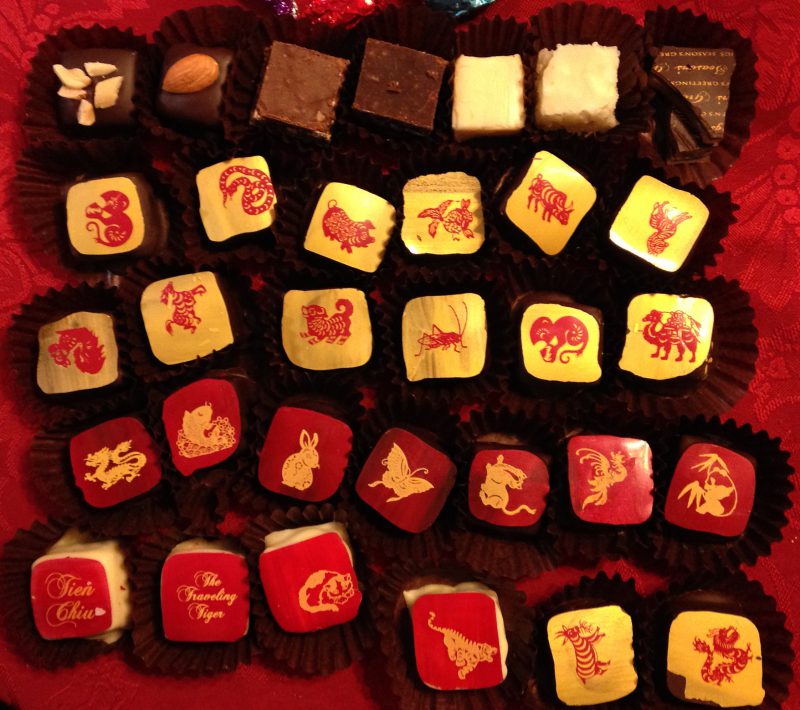 I usually spend the first half of chocolate season testing new flavors. Since everyone asks me “How did you come up with that flavor?” I thought I’d share how I do it.

To my mind, a good bonbon has a balanced, complex flavor profile. Perfumers talk about “top notes,” “middle notes,” and “base notes”. I think of confections as having something similar. In my flavor vocabulary, bitter, earthy, and musky overtones are base notes. Most fruits, acids, and spices are middle notes. Flowers, citrus oils, and the sweeter herbs (e.g. basil) are top notes. Unlike perfumes, a good bonbon doesn’t need to have all three notes, but I strive to have at least two. (This is my personal preference, of course; everyone has different ideas of “good”.)

The first key to composing interesting flavors is understanding what chocolate tastes like.

Dark chocolate’s basic flavor profile is a base note: bitter and a little earthy. (Plus moderate sweetness.) To get a good flavor combination, I generally add either a middle or a top note. So I use dark chocolate with spices, nuts, florals, herbs, and the more acid fruits. I don’t generally use it with other base notes, because I find that the two flavors tend to “battle” each other, and the chocolate usually wins. So truffles (the fungus) don’t work well with dark chocolate, because the flavor of truffles is mostly an earthy fragrance, which disappears under an avalanche of similar flavors from the dark chocolate. Similarly, black tea does not perform well, because it consists mostly of base notes. Green tea, on the other hand, works just fine, because it has strong grassy and sometimes floral notes that sit in a higher range. So even though the chocolate overwhelms the bitter flavors in the green tea, you can taste the other flavors just fine.

Coffee is an interesting case, because it’s a mix of bitter and acid flavors, plus the scent of coffee, which I’d categorize (completely non-scientifically) as a middle to top note. When you mix coffee with dark chocolate, the result is a very bitter flavor with a hint of acidity and the coffee “nose”. (Plus chocolate, of course.) You’re basically doubling down on the bitterness and “depth” of the flavor. Some people like this; some don’t. If I do coffee with dark chocolate, I’ll mix it with a sweet and strongly flavored spice (cardamom leaps to mind), both to add a different note and to cut the perceived bitterness. More often, I’ll pair coffee with white chocolate, where the bitterness and acidity complement the floral “top note” of vanilla. I find that makes it easier to showcase both flavors.

White chocolate’s flavor profile is primarily floral (vanilla) plus a little creaminess. Most people think of vanilla as a subtle flavor, because it interacts only with the nose (only bitter/acid/sweet/salty is perceived by the tongue, the rest is in the nose). But it’s actually a very strong top note. So it tends to interfere with perception of other floral top notes – I don’t generally pair jasmine or rose with white chocolate, for example, because it turns into a war over who gets to dominate. (Lavender is an exception, I think because its pungency and latent bitterness operate in a different range than the vanilla.)

White chocolate is also very sweet, so I generally add something acid or bitter to balance out the flavor profile of a white chocolate center. So I’ll pair white chocolate with green tea, citrus fruits (particularly the tarter ones like lemon or lime), coffee, fruits, and so on. If I don’t, the result is often cloyingly sweet.

Milk chocolate is a midpoint between dark and white chocolate. I’m not a big milk chocolate person, so I don’t use it much.

Now, some flavors don’t mix well with any of the three chocolates. Maple syrup, for example, has a strong flavor. But it is composed of an earthy base note plus a sweet top note (very vanilla-ish in my book). Dark chocolate overwhelms the base note and white chocolate overwhelms the top note. So if you mix maple syrup with either white or dark chocolate to make a bonbon center, the taste doesn’t come through. Does that mean it’s impossible to use maple syrup in bonbons?

No! But it does mean you need to use it differently. You need to concentrate the flavor rather than diluting it. The easiest way to do this is by not using a ganache center (chocolate mixed with cream and butter), but a type of center that concentrates the flavor. Caramels and fruit jellies work very well. These centers concentrate the non-chocolate flavors and enable them to come through. (Blackberry, for example, is much more subtle than raspberry so does better when concentrated in a fruit jelly.) I’ve been experimenting with maple syrup for years, trying to get it to work – one of my test flavors this year is maple bourbon caramels, and it seems to be working out nicely so far. (The bourbon adds a woodiness and a little bitterness to offset the sweetness of the maple syrup. )

After I’ve created and tested the basic flavor profile, I cut up the centers and dip them into the appropriate chocolate. I’m testing two things. First, I want to know whether the taste of the center is still strong enough to come through clearly when mixed with the chocolate coating. Second, I want to see how the flavor develops on the tongue.

Chocolate bonbons do not deliver a single flavor. Instead, it’s parceled out over time, as the various parts of the bonbon break down in your mouth. In particular, the flavor of the center generally “arrives” before the flavor of the chocolate coating, because the center either has water mixed in to soften it (ganaches and fruit jellies) or is composed primarily of sugar (caramels and fruit jellies). The chocolate coating, on the other hand, is an emulsion of cocoa butter, cocoa powder (for dark chocolate), and sugar. You don’t really taste the cocoa powder until the cocoa butter surrounding it melts, whereas a water or sugar-based center releases its flavor a lot faster. (This is one reason why caramels and fruit jellies are so effective for concentrating flavors that don’t stand up to chocolate on their own – they melt faster in your mouth so you get a burst of the “pure” flavor before the chocolate shows up.)

I won’t throw a bonbon out of bed because it doesn’t develop in an intriguing way, but the ones that do tend to win a permanent place in the box. This is pretty rare.

The final step in flavor testing is to wait a few days and then sample the chocolate again. The inside of a chocolate, particularly a ganache, changes over time as the flavors combine and interact with the cream and dark chocolate. The results can be surprising. I had a very strongly flavored three-chile chocolate that looked very promising – but three days later, all you could taste was a hint of chipotle. The other two chiles had vanished completely.

Conversely, flavors can mellow. Last night I made a dark chocolate ganache with grapefruit zest and lavender. I tasted it right after making it, and it was such a disaster I nearly threw it out. I had forgotten that grapefruit zest and lavender buds are both bitter. Combined with the dark chocolate, the result was unpleasantly harsh. This morning I tasted it again, and the taste was quite pleasant – initial chocolate impact, with the lavender coming through in the middle and a hint of grapefruit at the end. I’m still not sure whether it will make it into production (the lavender tends to overwhelm the grapefruit, I think), but I’ll cut it, dip it in chocolate, and give it a chance. If I have time I may do a re-run and add more grapefruit zest.

One of my favorite flavors, by the way, is MacAllan 12 Scotch in a dark chocolate ganache. Not just because it tastes good – though it does – but because the flavors develop intriguingly over a period of about three days. Sadly, you’ll never taste this unless you make them yourself – so what are you waiting for?

315 grams heavy cream
90 grams glucose (or light corn syrup, but glucose is better – you can order it on Amazon)
100 grams Scotch whiskey (I use MacAllan 12)
40 grams softened butter
750 grams dark chocolate (I use Valrhona Extra Bitter, which you can get from Chocosphere)

Chop dark chocolate into 1/4 to 1/2″ dice. (If using Valrhona pastilles, you don’t need to chop anything). Put in a bowl.

Mix heavy cream with glucose and bring to a boil. Pour over the dark chocolate and let sit for a few minutes so the chocolate melts. (Push down any lumps of chocolate visible on top so they’re surrounded by the hot liquid.) Using a small whisk, whisk around the center of the bowl to mix the chocolate with the liquid. Try to create a smooth, thick mix in the center first, then slowly stir in widening circles until all the liquid has been incorporated. Add Scotch and repeat the process until you have a smooth mix. Finally, add the softened butter and repeat. Pour into a bowl and let cool to room temperature.

Using a melon baller, scoop bits out of the bowl and roll them between your (very clean, well-powdered with cocoa) hands to create a small sphere of ganache. Toss each sphere into a bowl of cocoa powder to coat them, then put them into a container and store in the fridge.

(The flavors won’t evolve as quickly as if you were storing a chocolate-covered bonbon at room temperature, but they do change – and it’s delicious at any stage.)

If you cannot find glucose (the syrup form, not the powdered kind), in a pinch you can just replace it with cream.

If the mixture winds up curdling when mixed, it’s either too hot or too cold. If you get the temperature between 90 and 94F, it should work fine. (And yes, adjusting the temperature that finely is every bit as irritating as it sounds. But it will work.)

If the mixture is too soft, there isn’t enough cocoa butter in your chocolate. You can either re-melt and add more chocolate (keeping in mind the temperature note above), or – what I usually do – just stick it in the fridge until it’s firm enough to make into balls. (It will also make excellent hot chocolate if you add it to milk and microwave. It’s OK as hot fudge, though it tends to solidify.)

If the mixture is too hard, a little heat (I’m talking 5-10 seconds at a time in the microwave, on low power) will soften it up.

Previous post: Your normal is not my normal: Why people misunderstand mental illness
Next post: Tien 1, common sense 0