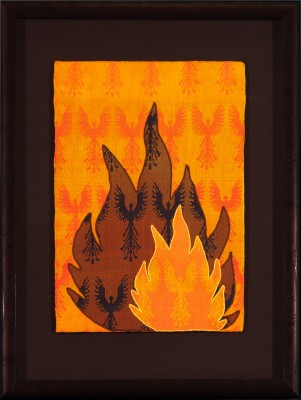 I conceived this piece as part of a series about phoenixes – life, death, and rebirth. I have bipolar disorder, and without medication, my moods cycle between “flying high” – hypomania – and the darkness of depression. This cycle of mood swings has almost killed me twice (read my essay on living with bipolar disorder if you want more details), and I wanted to create a piece that celebrated my breaking free of the cycle ten years ago, when I was finally diagnosed and treated correctly. The phoenix seemed the perfect symbol for this – a bird that dies in flame and is resurrected from its own ashes.

At the outset, I had a theme but no idea what the piece would be – a garment? a wall hanging? a sculpture? I made mood boards, mind maps, and lots of sketches, but wasn’t satisfied with any of them – no matter what I tried, no one design captured the ideas I was striving for. It wasn’t until I realized that I didn’t have to capture all the ideas in a single design, but could work in series, producing multiple works with the same theme, that I felt comfortable moving into a single design.

I started by weaving samples – eleven yards of samples! – in very fine threads. I used a turned summer and winter structure with a 120/2 silk ground warp and a 60/2 silk pattern warp. (For the uninitiated, 60/2 silk is slightly finer than sewing thread, and 120/2 silk is about one-third the size of sewing thread. So these were very fine threads indeed!) I painted the warp in different colors and dyed different colors of weft so I could try many combinations. Eventually I settled on two colorways: one in fiery colors, and one with a brightly colored pattern warp and solid black ground warp/weft.

I wove many samples and eventually decided to use two structures: the turned summer and winter I started with, and a mix of double weave and twill (the black phoenixes). I felt that the black phoenixes on the smoky orange background conveyed the idea of “death” nicely, and the fiery-colored phoenixes conveyed the joy of life, but I was puzzling over how to combine them.

What finally saved me was a show deadline! I had planned to enter the Pikes Peak Weavers Guild show Woven Together: Firestorm, commemorating the 2012 Colorado wildfires (some of the worst ever), and was rapidly running out of time to put together an entry. I wanted something to be spot-on for the theme, and eventually it dawned on me that their show was about fire – so why not use flames? I hastily put together a template, and after much rearranging, had the composition I wanted. The two flames on the fiery background show the cycle of death and rebirth – from living phoenixes to dead and desolate phoenixes to vibrant life again.

Many thanks to Thrasher’s Framing for mounting the piece and to Joe Decker for the excellent photography!