You are here: Home / Archives for art science

It’s been almost exactly three years since I quit my job at Google, stepping out of high-tech and leaving my old identity behind. Since then, I feel much of my personal work has been around freeing myself from who I was, leaving me to explore who I am and will be.

In my book Master Your Craft: Strategies for Designing, Making, and Selling Artisan Work, one of the best pieces of advice for finding your own voice came from metalworker Debora Mauser:

If you look at some of the pieces [an artist] has made, say ten pieces, what do they look like? Are they all shiny metal? Has he or she used blue lapis in all the pieces? What about those ten pieces does he or she love? And that is usually the maker’s artistic voice, even if he or she didn’t realize it. Most people will like a shape, a color, or a texture, and that will show up in much of their work.

Once you discover your style and your voice, you can increase your creativity. You don’t have to be limited. You can develop that voice, and take it off in different directions.

One of the big projects I completed during the last three years was my Procion MX dye sample project, where I dyed 1500 samples using Procion MX dyes on cotton, then took photos, wrote up the results, and posted them on my blog. I got two comments that made me think, “Hmm.” The first was from professional dyer/weaver Dawn Jacobson:

If the Nobel Committee gave a prize for dyeing, I’d submit your name for consideration. This is the most comprehensive set of dye data I’ve ever had the pleasure of seeing–you’ve made it reproducible, organized, and understandable, and it definitely fills a void in the area of controlled fiber-reactive dyeing.

The other was from a fellow Caltech alum:

Lol! 😉 Your article reads like a scientific paper: abstract, results, methods. All you need is a conclusion suggesting future work and a nod to your grant agencies.

These two comments startled me. I had been thinking of myself as an artist making samples for future artwork. But these two comments made me realize that, even as an artist, I was still a scientist. Faced with a lack of knowledge, my gut instinct is to design a rigorous experiment to gather data systematically, run the experiment with careful attention to reproducible methodology, write up the results, and publish them. I can only attribute this to genetics: I was born to and raised by two scientific researchers. So, when confronted with the unknown, I have a deeply rooted, irresistible, positively atavistic urge to conduct academic research studies. (You know how some people are born with a silver spoon in their mouth? I came into the world with a lab notebook between my teeth.)

So that was one key piece of my identity.

The second key discovery was that, while I am definitely interested in doing artistic/creative things, I’m not really interested in being an artist. This astonished me since I had quit my job to become a full-time artist, but after three years of producing almost no art, it was pretty undeniable. Okay, being Board President at the San Jose Museum of Quilts and Textiles ate almost two years of my life, and I was setting up a business for most of the rest of the time, but still, if being an artist was a huge fire in my belly, I’d have come up with some way to do it. From this I conclude that creating things is important to me, but doing art – work that has a message and that communicates something to people – isn’t. I think that’s because what is considered art these days is often overtly political, with an obvious message. I’m not interested in creating that kind of art, probably because I’m a writer. I can create far more powerful political statements through my prose than I can through my weaving, and if I’m going to make that kind of statement, I’d rather write it. I want to reserve my textile work for the things I want to do with it, which center around creating aesthetically powerful, technically intricate work. If that’s not art, that’s fine: It’s what I want to make, and that’s good enough for me.

The third discovery – well, not discovery, exactly, because I’ve known it all along – is that at the very bottom of everything, I’m a writer. More specifically, I’m a nonfiction writer. I like to use writing to explain things, either through stories about my own experience or through writing up the results of my research studies. I’ve been writing since I was twelve. I’m probably even more compulsive about it than I am about the academic studies. (Though I can’t blame my parents for the writing part. I just fell in love with it.)

Put these three together and you get exactly what I’m doing now: Developing and teaching a scientific, systematic approach to art. I’m calling it “art science,” after “food science”. It’s the same idea: taking a field that has always been considered intuitive and analyzing it/explaining it using an analytical, scientific approach. (Curiously, I am following in a fellow Caltech alum’s footsteps here: popular food science writing was sparked by Tech alum Harold McGee’s book On Food and Cooking, which took a topic that had been the province of food chemists and made it accessible and interesting to home chefs. I don’t think this is coincidence – to do this kind of writing, you need both scientific background and literary bent. And it’s easier to get the writing skills post facto than the science,)

Art science isn’t a new concept any more than food science was when Harold McGee started writing about it. But there are a lot of similarities between the way that art is regarded now and the way cooking was regarded then. Much of the way we “read” an image is hardwired into us by biology. Our visual system is physically designed to do things like find edges and areas of high contrast. Doing so allows us to pick out a lion (or gazelle) in the underbrush faster because we don’t have to scan every bit of green, we just have to find the one bit of contrasting yellow-brown in a sea of green. But because our system is hardwired to do this, placing a small area of high contrast in an otherwise unchanging background will draw the eye there instantly. You can’t avoid it. It’s hardwired into you.

So if you look at this swatch, 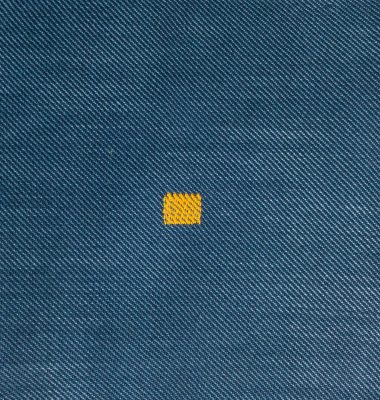 ….the first thing you saw was the yellow dot. I can tell you that not because I have a natural color sense, but because I know how your visual system works.

So that’s how I’m viewing myself now: A teacher of art science, researching how artistic design works, then writing/teaching about it to educate others. Because I feel that there are a lot of myths around art that can be terribly destructive to anyone who wants to create original work. In particular, the idea that artistic “talent” is an innate gift. It isn’t, and it’s not talent, either. Being good at artistic design, like being good at anything else, is largely a matter of skill and knowledge. And those can be learned by anyone who is willing to put in study and practice.

Here’s a teaser shot from the filming of my class “Color Courage for Weavers”. I’m releasing it next month.