You are here: Home / Archives for autumn splendor

Yesterday I was considering Lara’s comment that she prefers nonwoven fabrics for applique.  I unfortunately couldn’t use either leather or ultrasuede, basically because I need the colors to match the coat and I don’t have the skills to dye leather.  (I also wouldn’t be able to acquire the colors I need as quickly as I would need it.)  I made a brief foray into needlefelting, but was unsuccessful.

Then I decided to see what a very light application of Fray Check would do.  I used the tip of a pin to apply a tiny, tiny bead of Fray Check along the edges of  a test piece.  It came out beautifully, so I made an entire leaf using Fray Check and an overcast stitch.  It’s the left-hand leaf in this photo:

I really like this leaf.  The veining shows clearly without being overpowering, and is delicate enough to satisfy my taste for close-up detail.  The edges are neat and the overcasting looks good – much, much better than in the purple leaf (center) which has hairy-looking edges and irregular overcasting.  I will redo the purple leaf using Fray Check on the edges, and do the other three leaves using this method.

The Fray Check does stiffen the edges slightly, but for this application, that’s just fine – I want them stiffened anyway.  I have not yet wired the edges of the leaf, but will leave that for the very last, when all five leaves are complete.

And, in other news, Prop 8 has been declared unconstitutional by the appeals court.  Wahoo!  Time to go dance in the streets, and hope that the Supreme Court agrees.

(Prop 8, if you don’t live in California, was an amendment to the California constitution that specifically prohibited gay marriage, reserving the term for a union between heterosexual couples.  The appeals court, ruling 2-1, overturned it because it violated the 14th Amendment to the U.S. Constitution – the Equal Protection Clause, which says you may not enact a law discriminating against a class of people without compelling reason.  (It’s actually more complicated than that, but you can read the entire 66-page decision if you are interested.  I read it already, it’s interesting reading!))

I decided to try out Sharon’s idea, and made part of a third prototype leaf:

This worked out okay, but not spectacular – it produces a nice neat bound edge, but a thick, heavy-looking one.

Before working on the third prototype, I had finished (?) the first leaf, a purple one:

The hand overcast edges look a little ragged, but I like the embroidered veins.  The right half is wired with fine gold wire so it can be shaped.  I still need to wire the other half and shape it in a suitable manner.

I think my final solution will be hand overcast edges, but I’m going to “cheat” and apply an invisible edging of Fray Check to discourage fraying.  A heavy application of Fray Check will discolor the fabric, but a very very thin edging (applied with the point of a pin) came out  invisible on my sample, and discourages fraying rather nicely.  So I think I will redo the purple leaf, this time applying Fray Check to the edges to neaten them up a bit.  I may also machine stitch right next to the edge to further stabilize it.  Not sure yet. More experiments!

Talked to Sharon yesterday and got the fine points of finishing for Autumn Splendor.  I’m guesstimating I have ten hours of work left on it, not including the leaves.  Fortunately those 10 hours are largely things I can defer until after the photo shoot, so I’m going to focus on the leaves!  Those definitely have to be done by Sunday.

And here is an annotated version:

Here is my thinking:

So I think I have decided to do hand overcasting, either in a matching or slight contrast thread.  Rayon embroidery thread is probably a better choice than polyester or silk sewing thread – the first is too springy and the second doesn’t come in an appropriate color set.  A third option is embroidery floss, but I think it’s a little thicker than I would like.  I will have to experiment, of course.

I also think I like the more complex, articulated leaf (the second prototype) better than the simplified version.  It’s more interesting up close, and looks fine at a distance, too.

I took some scraps and developed a prototype leaf, experimenting with different ways to overcast the edges.  It’s hard to make out the distinctions in the photos, but I’ll explain.

And since the look against a green background is irrelevant, here is what it looks like in situ: 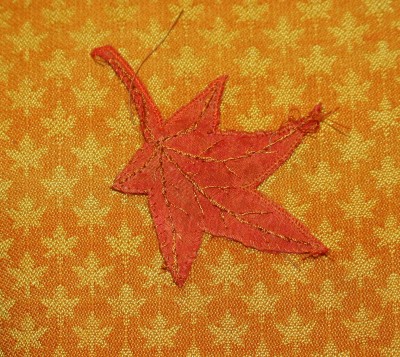 And a view from further back:

This is getting closer to what I want.  Close up, the leaf has delicate veining which rewards the close-up viewer, but further away, the leaf becomes a single block of color, strong enough to stand on its own against the rest of the garment.  I am pleased with this construction and will likely use it for the final leaves (which I will start sewing up tomorrow).

What I have not yet decided is how to handle the edges.  The machine zigzagged edge definitely produces a neater edge, but it is also harder-looking, and – to be quite honest – I am prejudiced against machine zigzagged edges.  They remind me of Girl Scout badges or sew-on patches commemorating a visit to some touristy location.  I just don’t like the look, and I think it’s too “hard” for this application.  I’d rather not use it unless I have to.

At the same time, however, I think my hand overcasting needs help, being uneven and somewhat messy-looking.  It does provide a softer, more handmade look, which I like, but it also looks amateurish.  If I could get neat, even stitches, I would totally go for it; as it is, I’m ambivalent.  I think I will probably use it, in the end, if only to  get the specter of Girl Scout badges out of my head.  But I will try to practice some more before doing the “real” leaves.

The only thing I haven’t tried yet is adding fine wire to the edges to make the leaves more three-dimensional.  I will play with that in the morning.

This morning, I dyed about 40 swatches, putting 4″x8″ pieces of various different fabrics into six small dyebaths.  I used the same colors of acid dye that I used to dye the wool weft, ranging from orange-red to maroon to purple.  I dyed swatches of chiffon, organza, dupioni organza, peau de soie, shantung silk, and a crinkled silk (which totally uncrinkled in the dyebath).  Totally unscientific; I mixed up the colors in the correct proportions, then tossed seven or eight swatches into each dyebath.  So, of course, they all came out slightly different colors, and some were a bit mottled – exactly as I had hoped.

After that I took a two-hour nap (the aftermath of being up far too late the night before), and when I woke up, I rearranged the swatches, layering the transparent fabrics over the opaque ones until I had some color combinations I liked.

And here we are:

And a close-up, that shows some of the color variation:

I’ve also bought a bunch of rayon embroidery thread, both to zigzag the edges if I go that route and to hand-embroider the veins onto the leaves:

I bought some holographic thread for fun, but I really doubt I’m going to use it – the sparkle doesn’t go with the rest of the piece.

Next up is to determine the construction.  I’m going to take some of the unused swatches from my dye experiments and use them to experiment with leaf construction.  I’m contemplating two options: sew up a leaf and then turn it inside-out, so the raw edges are hidden, or sew the layers together and then overcast the edges with a machine zigzag.  I’m not thrilled with either option – the first is apt to be bulky and the second involves machine-zigzagged edges, which I don’t like either.  But I don’t know of a better edge finish, particularly when dealing with a delicate, transparent fabric.  I could applique the leaf directly to the fabric, which would hide the raw edges, but then they wouldn’t be three-dimensional.

So I’m off to read up on couture edge finishes, and then do some experimenting!