You are here: Home / Archives for cats

Facebook reminded me today (how could I possibly have forgotten?) that today is our three-year cat-iversary! Yes, it’s been exactly three years since we adopted a pair of adorable kittens, who grew into our beautiful Fritz and mischievous Tigress.

Here they are on Adoption Day:

I can’t resist a few more baby pictures. They were such cute kittens!

And then, of course, they grew into equally active teenagers:

Alas, they did have their flaws. We had to counsel Fritz about the dangers of shoe-sniffing:

which led to binge drinking:

But on the whole, they were happy, beautiful, delightfully mischievous kittens and young cats.

And how are they now? King and queen of the household, of course.

It’s been a wonderful three years with Fritz and Tigress, and we look forward to many more!

Yesterday we celebrated our cat-iversary – two years with the inestimable Tigress and Fritz! All the way from here: 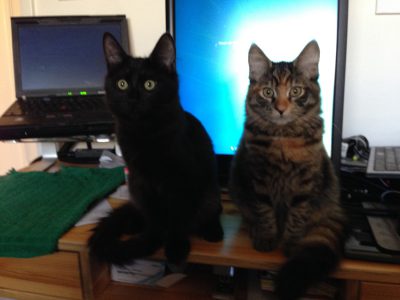 and finally to the wonderful adults they are today:

Looking forward to many more years with our fabulous cats!

“But wait!” you say. “What’s going on with Fritz and Tigress, who have been sadly absent for the last few posts?”

Well, despite their pleas to be packed, we couldn’t convince ourselves that they’d really enjoy being tossed around in luggage, or hauled from place to place. So we left them at home, and hired a cat-sitter to come by and take care of them. She’s been having fun playing with them (and feeding them/scooping the litter box of course), and is sending us a continuous stream of cute cat photos to help stave off cat withdrawal symptoms. Some of them are so adorable I just have to share:

There is cute cat video too, of course. Here are Fritz and Tigress chasing a laser pointer:

I think they may actually have more fun when we’re not around!

No, not to me! To someone much more important. 🙂

On September 22, 2013, the vet estimated that our beautiful kittens were about three months old. Accordingly, we decided that their “official” birthday should be June 21, the summer solstice. It seemed appropriate to give them the longest day of the year, since they have brought so much light into our lives!

So yesterday was their first birthday – they are officially adult cats now. They celebrated by running around the house like crazy, then sleeping like crazy, then spending long periods in front of the screen door, watching cat TV. In short, they continued to do all the wonderful cat-like things they usually do. They are awesome cats and we love them very much.

In celebration, I thought I’d give you a series of photos, one or two for each month since they arrived in our lives:

June 9 – Feline harassment at its best!

So happy birthday to Fritz and Tigress! May they sleep like crazy, run around the house like crazy, and be their utterly adorable selves for many more.

I’m preparing to play with surface design on warps. The basic idea is pretty simple: stretch a warp out on a long table, then apply paint and/or dyes to the warp. Reel the warp back onto the loom, and weave it with whatever structure you choose. Easy, right?

Well, yes and no. Surface design on warps is a bit like playing a violin. Any fool can pick up a bow and make noise, but making music with a violin requires considerable technical mastery. And getting controlled effects on unwoven warps can be, well, complicated.

For example, here’s an experiment I did last year, using screen printing on warps:

As you can see, even though the images are printed cleanly onto a perfectly tensioned warp, there is considerable distortion when woven. The circles flatten into ovals, and the edges distort and blur. Also, the diagonal lines of the weave structure (a reversing twill) further obscure the image.

For the kimono, I need a panel about five and a half feet long, so this approach won’t work. So I’ve decided to use the other commonly used method – stretch the warp out on a long table and do the printing on the table. To minimize distortion, I’m weaving the warp into very loose “cloth” using a superfine weft, with about an eighth of an inch between picks. I wove a stick in at the beginning and end of the section to be printed, and will use those to stretch out the section evenly on the table for printing.

But before I can print on the warp, I need something to print with. So I spent a good chunk of time this afternoon making these stencils:

The big stencils are about nine by thirty inches; the small one is about two by four inches.

I plan to use these stencils to test a couple of things:

In particular, I am using the small phoenixes to test the amount of detail possible in an image, and the large phoenixes to test what happens to a larger design. I’ve prepared 36 inches of warp, which is enough to print two large and many small phoenixes. Now I just need to finish the stencils, which will take another day or two, and I’ll be ready to experiment.

(The stencils, by the way, are carved from fusible interfacing – the heavy “craft” type. Two layers of interfacing, fused together with a layer of nylon tulle in between. The tulle stabilizes the tiny details and the interfacing makes the stencil. I need to coat them with two layers of latex house paint and iron the paint to heat-set it; after that they’ll be ready to use. This technique is covered in detail in Jane Dunnewold’s excellent book Complex Cloth.)

I do plan to experiment with katazome (Japanese paste-resist dyeing) later, but for the first trial or two, I’m going to keep it simple and stencil rather than play with resists.

Finally, I went to a friend’s help-out-with-gardening party today, and when I came home, a certain black kitten was fascinated by my shoes. Here is Fritz, with his head stuffed eagerly into my left shoe:

Apparently the kittens have not yet discovered feline dignity. 🙂