You are here: Home / Archives for cloak yardage

Yesterday morning, I got up early and spent three solid hours working on the sample warp. In those three hours, I managed to thread, sley, tie on, debug, and weave about a foot worth of warp. (Don’t look so impressed – there were only ~360 threads in the sample, so quick and easy to do.)

And here are some photos: 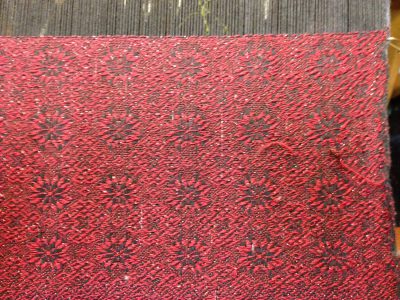 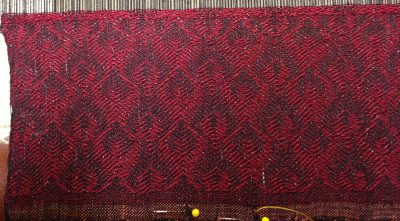 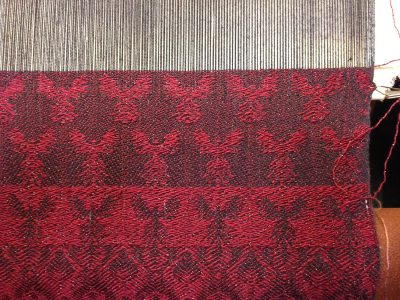 At the moment I like the center sample best. It’s a 24-shaft pattern based roughly on draft #61247 on Handweaving.net – the original is for 20 shafts, I adapted it for 24 shaft point twill threading and eliminated some of the longer floats. There are a few other variations I’d like to try, and will tackle them over the next few days.

I’m also starting to think about tie-dyeing things. I am having a few friends over for a tie-dye party on Sunday, and have been thinking about what I want to dye. I just got a book on tie-dyeing stars (mandalas), so I definitely want to try that out. And there are some shirts I’ve wanted to scrunch-dye for work stuff. Plus some pairs of socks (socks? Yes, tie-dye socks). Lots of possibilities. I want to prep my stuff in advance so I can help my friends at the same time I’m dyeing stuff, so this requires a bit of forethought.

Off to bed! I hope I can sleep. I’m still super excited about the new gig.