You are here: Home / Archives for ice dyeing

I’ve spent the last several days experimenting with ice dyeing. I had planned to set up the loom for triple weave, using two layers of ice-dyed cotton warp and one layer of white wool warp. But since I hadn’t ice-dyed before, I decided to experiment with it before dyeing a long warp.

To ice dye something, simply soak it in soda ash solution, pile ice on top, and dribble fiber-reactive dye, either powdered or liquid, on top. (If you are using powdered fiber-reactive dye, you MUST use a dust mask or the dust will get into your lungs. I use a respirator.) Then you wait for the ice to melt. If you want darker colors/less white, flip whatever you’re dyeing over and ice dye again on the other side. Wait a day or so for the dye to set, and you’re done. (Here are more detailed instructions.)

I decided to experiment on T-shirts, because T-shirts are the cheapest fabric I know of, and because I needed to expand my tie-dye wardrobe anyway (doesn’t everyone?). So I paid $33 for a dozen T-shirts at Dharma Trading Company, and off I went.

Here’s a photo of the T-shirts in process. I cut up cardboard boxes, wrapped the cardboard around the T-shirts, and piled ice on top. Then I dribbled on dye – red/orange/yellow and blue/green/purple, as I wanted to test both color combinations.

And here are some of the shirts I got (primarily the blue/purple/green ones as the red ones mostly weren’t that interesting). 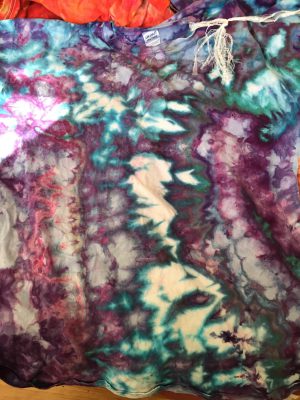 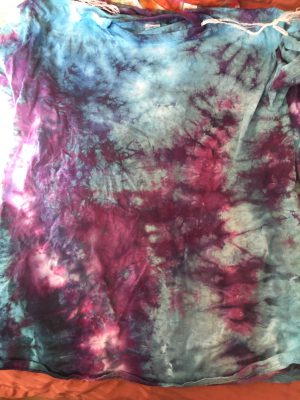 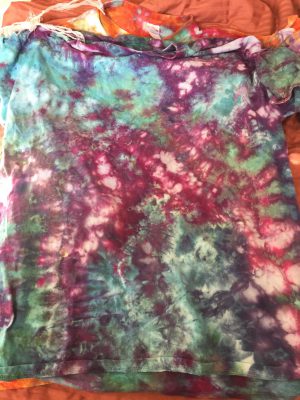 These were all scrunched up loosely with dye dribbled randomly on top, then flipped over and treated the same way.

I decided to try some actual tie-dye patterns. Here’s a V-shaped fold with red/orange/yellow on one side and blue/purple/green on the other: 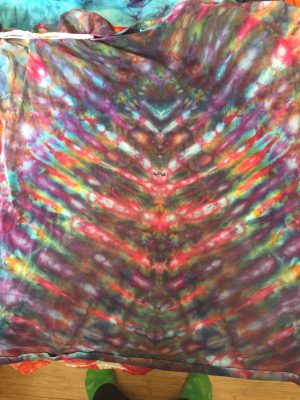 And (you may remember this from last post) here is a spiral, red on one side and blue on the other:

Of course, after I finished all my ice dyeing experiments, a weaving buddy blew my triple-weave plans out of the water by pointing out that I could do the piece much more simply if I painted the warp on the loom, rather than trying to dye two painted warps, then exchange layers throughout the piece. So instead of putting on a triple weave warp with ice-dyed warps, I’m going to put on a double weave warp, one layer of white wool and one layer of white cotton. That should enable me to weave all the pieces I’ve been contemplating.

I think I may use the rest of the current warp to experiment with painting warps on the loom, rather than weaving the rest of the cat placemats. The cat placemats are cute, but also very laborious, and the central motif is not my own design, which complicates showing it to people. And it would be helpful to test whether the warp painting idea will work before I commit to a long and expensive warp.

Speaking of cats, I decided to take a photo of the stack of tie-dyed shirts. Of course, as soon as I laid out the stack, someone decided to photobomb.

“But having a cat makes every photo better,” explains Tigress. “The Internet says so.”