You are here: Home / Archives for infinite warp

I’m currently working on the most tedious job of all: finishing touches.  In particular, I’m preparing the handling swatches for my yardage gallery entries, by binding the raw edges with silk charmeuse.  It’s a laborious process, taking about two hours per swatch, and makes me impatient because mentally I’ve moved on from both projects.  In other words, this isn’t part of the project, mentally speaking, but something that is keeping me from my current project.  Grump.

However, I did finish one of the swatches last night, and will tackle the other one today or tomorrow.  Then I’ll finish up Autumn Splendor by tacking the lining to the outer garment in strategic places and sewing in the label.  After that, I’ll be done with all the finishing bits.

Anyway, here is a photo of the finished gallery swatch.  The binding looks clumsy and amateurish to me, but I’m not sure how to get it any neater.  Part of it is the fabric – silk charmeuse drapes, it doesn’t produce crisp corners.  Perhaps I should have used a different fabric, but this is what I had on hand.

I’m hoping to be able to pick up the plywood for the loom platform tonight (it will involve renting a pickup from the hardware store, and they only have one available for rental, so this is kind of iffy), in which case I can start work either tonight or over the weekend.

Eight months and twenty-one days after beginning, I have finished weaving off the Infinite Warp – thirty-seven yards of 60/2 silk.  I feel like the little girl in the Shel Silverstein poem:

Have you heard of tiny Melinda Mae,
Who ate a monstrous whale?
She thought she could,
She said she would,
So she started in right at the tail.

And everyone said,”You’re much too small,”
But that didn’t bother Melinda at all,
She took little bites and she chewed very slow,
Just like a good girl should…

…and in eighty-nine years she ate that whale
Because she said she would!

Here is the lovely sight I saw last night:

I actually was not able to weave to the very end because some warp threads mysteriously wound up one turn of the beam shorter than the others:

I’m not quite sure how that happened, but I suspect it was when I had to cut off a chunk of warp after an unsuccessful attempt at advancing the warp to screen print on it.

At any rate, I am now done done DONE! and I will never put on that long of a warp in fine threads again.  Eight months is a bit too long, even for me.

The other bit of good news is that I wove a total of seven patterns for CNCH’s Special Sample Service.  Here they are, before wet-finishing: 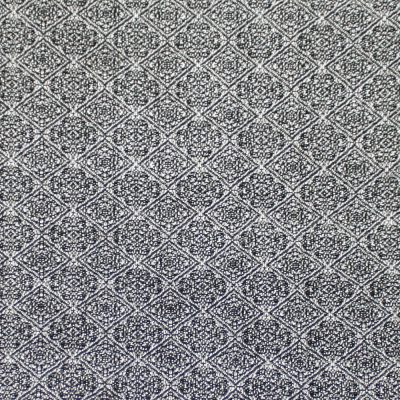 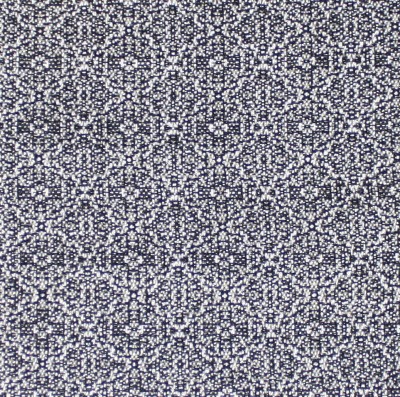 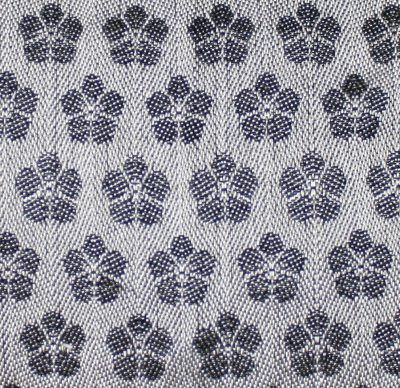 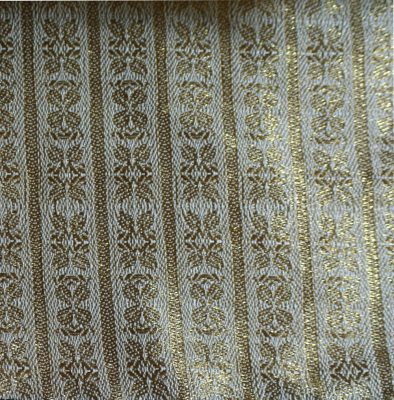 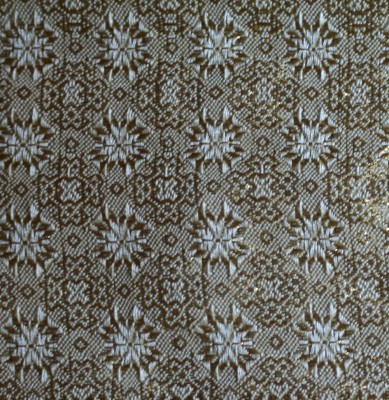 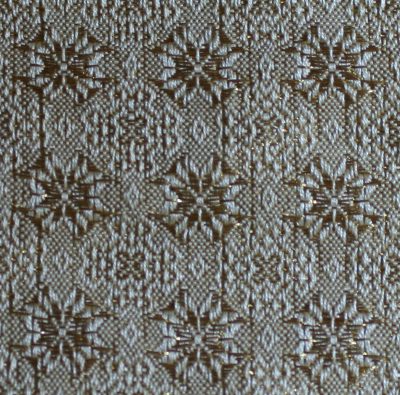 I’m not sure the last one is going to work (the last two photos are front and back); I can already see portions ominously collapsing in the first photo of it.  I think it will blur out when it hits the water.  But you never know…!

(Most of these are variations on drafts from Handweaving.net, with modifications to make them weavable without a ground.  The draft number is in the photo title (roll over the photo with the mouse), but I have made (sometimes extensive) modifications, so if you want the wif file, drop me an email or leave a comment.)

And that concludes my pre-move weaving.  While it is possible to disassemble and move the loom with a warp on it, I’d rather not – particularly while working with fine, delicate threads.  My next warp will be some 140/2 silk that Lillian Whipple was kind enough to sell me – much too fine to risk the rigors of a move.  So my next warp will happen after we move.

Nothing directly creative on the slate for today – the plan is to go over to the new house, and figure out how to put in the dye sink.  We are having a contractor put in the sink, but to do that we have to have the sink ready to install.  Currently there is bare dirt (and lemon tree roots) where the sink will go; we will either need to pour more concrete or put in pavers to level the surface.  Which takes time and research.  (But at the end of it, I’ll have a dye sink!  How exciting.

After that, I’ll investigate sealing and finishing the concrete floor of the garage.  We’re not sure we want to do this yet (it depends on the hassle/reward profile of the job) but if we’re going to do it, we’d better do it now, before we move in a gazillion boxes of stuff (not to mention the loom!).  This will be my project, if we do it at all; Mike’s going to be busy putting in electrical wiring and the dishwasher.

The painters are coming at the end of next week, but the flooring people won’t be able to get us the flooring until a week or two after that.  So it looks like the move will happen sometime in early June.

Off to the farmer’s market!  When I get back, if we don’t head directly for the new house, I’ll wet-finish all that fabric.

I’ve decided to make the rest of the warp samples for the Helen Pope Special Sample Service at CNCH.  This is a sale of samples to benefit the Conference of Northern California Handweavers; it simultaneously raises funds for CNCH and acts as a kind of sample exchange.  Members can buy samples for a nominal sum (I think $1-2 per sample); CNCH gets money; everyone benefits!  But people need to send in samples for it to succeed.  So I am weaving a series of samples, and taking the opportunity to use up the miscellaneous half-pirns of this and that sitting in my basket of wefts.

Here is the one that I am currently weaving (with the leftover pirns of gold thread from the wedding-coat):

The draft for this can be found on Handweaving.net, here.

Looks pretty, doesn’t it?  Unfortunately, I suspect there are not enough interlacements in the draft to be woven without a ground cloth; I think it will collapse as soon as it hits the water.  But there is always that little chance that it will work without modification, so I’ve woven up seven or eight inches and will see whether the pattern survives wet-finishing.  I’ll probably also weave a little of that pattern with a silk or cashmere weft, to see whether it works with a “regular” yarn.

I have now woven four sets of samples, and there is still a little warp on the beam, but not much.  I’m going to continue weaving eight or nine-inch swatches of each sample tomorrow, then (after I run out of warp) I’m going to wet-finish, press, and cut up all the samples over the weekend.  I think the deadline for the sample service is May 1, so (as usual) I will be skidding in just under the line, both with this and the yardage I’m entering for the yardage gallery.

That’s how long this baby is:

It was a close race, but I ran out of weft before running out of either warp or time.  I’m estimating I have maybe eighteen inches of weavable warp left – not enough to do anything with, really, so I may just cut it off.

Or I may not.  Some stubborn little bit of me wants to weave off the entire warp, and just find some other use for that last eighteen inches.  After all, I’ve been weaving this warp for eight and a half months now – what’s a day or two more?  And what a warp – 37 yards of 60/2 silk.  Never again!  So I want to make the most of what’s left.  But I haven’t figured out what, yet, and I really need to cut off and prep the already-woven fabric for the CNCH yardage show.

(I feel a bit like my friend who did her first century bicycle ride (a hundred miles in one day), and discovered the route organizers had made the route a little too short – half a mile too short, to be exact.  So she rode around in circles in the parking lot until her bike odometer finally tripped over 100 miles.  I feel just like that – if I’m going to do my longest warp ever, dammit, I want to do the entire thing!  Silly?  Yes.  But understandable, I hope!)

Perhaps I’ll weave samples for the Helen Pope Special Sample Service at CNCH.  That would be a fine use for 18″ of warp, and would use it up nicely.  I figure I can do that in a day or two, if I’m quick.

Here’s a photo of the networked-rosepath draft I posted this morning, now on the loom/woven up:

I really like this, and have already woven the first 16″.  At this rate, the three-yard minimum should be a breeze.

I’ve also decided to leave it as it stands – it’s beautiful, and also quite complex in itself.  Adding surface design techniques would merely be distracting.  And (as I keep reminding myself) not everything has to be blingy!