You are here: Home / Archives for mohair coat

I really should have made these before putting on the sleeves and facings, but I made my own shoulder pads today.  It was interesting to contrast them with commercial pads – these are designed for the specific garment, using the pattern pieces for the front and rear shoulders, and (unsurprisingly) they fit a heckuva lot better than the cheap commercial ones!

Here are a few photos of the shoulder-pads-in-progress:

Now I’m just about done with the coat – I’ve stabstitched the collar seams together, so all that’s left is the lining.  I’m sort of hoping I can get it finished before CNCH!   It’ll take some dedicated sewing tonight and tomorrow night, but, well, we’ll see.

I finished putting the collar and facings on the mohair coat today:

I’m moderately pleased with it.  The collar looks nice (good choice of colors), and one lapel is just about perfect.  In the other, however, it seems I didn’t add enough room for turn-of-cloth, and so the mohair fabric is showing behind the collar.  (If you load the full-size photo, you can see it.)  We’ll see whether the problem persists after I’ve tacked down the facing and applied the lining.

I botched sewing in one of the sleeves, so one sleeve hangs perfectly and the other has big wrinkle lines.  Unfortunately I didn’t see that until I had trimmed the seams, so I’m pretty much stuck with it.  Nonetheless I am fairly pleased with the coat overall.  Not perfect, but I’ve learned a lot, and it’s not bad for a first effort.

I still have to put in the lining, but the coat is nearly finished!  And a good thing too – I’m eager to get to work on the wedding dress, and of course there’s still the “real” coat to do!!

I was feeling rather blah yesterday, not up to the challenge of working on the coat, so I puttered around dyeing yarns instead.  Then I realized that it wasn’t my mental alertness preventing me from working on the coat, but stark raving terror at the prospect of actually having to DO something with the pieces, as in PUT THEM TOGETHER.  Up ’til now it’s all been preparatory work, tailor-basting the underlining to the fabric, tacking down interfacing, padstitching, fell-stitching, buttonholing, this, that, and the other.  But no actual assembly of the fabric.  Once I started assembling the fabric, I’d actually find out whether my design worked.

As I said, stark raving terror.

Upon realizing this, of course, there was only one thing to do.  I sat down, ate a small bowl of ice cream (purely for medicinal purposes, you understand), and launched into the sewing of the seams.

And here is a photo of the half-finished coat: 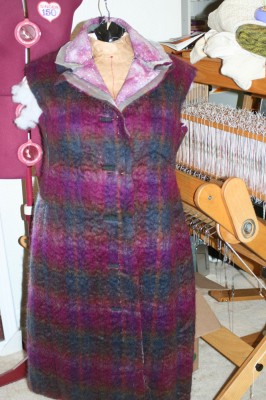 …and a closeup of the collar:

On the whole, I’m pleased.  It has some flaws, e.g. the front part with the buttonholes is cut very slightly off-grain.  Not enough to make a difference to the hang, as far as I can tell, but the yellow stripe near the buttonholes wanders into the buttonholes at the bottom.  Oh well, c’est la vie.  It is pretty clear to me, though, that with the strong vertical stripes of the Celtic-braid fabric, I’d darn well better get it precisely on-grain.  Or it will show, and badly.

I am pleased with the collar.  It rolls smoothly around the neck, and precisely on the roll line.  I am not so pleased with the lapels – I think I put the buttonhole too high, so it will not roll precisely on the roll line.  But I will have to wait until I finish assembling the coat, to be really sure.  One thing’s for sure: I am glad I am doing a practice coat before cutting into my handwoven!

Wedding-dress-wise, I’ve decided to make a mockup of the pattern before the workshop.  Considering how much work it is to weave up yardage, it’s only logical to make sure the cut is flattering before designing fabric for that pattern!  Since it’s only a week and a half to the workshop, however, that means I need to act pretty quickly.  So I will spend part of today cutting and sewing a muslin.

I have not been entirely idle the last day or two; I’ve been dyeing yarn samples for the wedding-dress project.  Here are some of them:

The ones to the left of the metallic gold are 60/2 and 70/2 silk; the ones to the right of the metallic gold are approximately the size of 30/2 silk, in a variety of yarns including alpaca, muga silk, wool, and a 75/25 silk/cashmere blend.  I dyed them in various colors without paying much attention to the exact ratios; most are a mix of Sabraset mustard and Sabraset chestnut brown, sometimes with a little turquoise thrown in.

I had a surprisingly difficult time getting pale colors, as you can tell from the strong browns and strong golds in the mix.  I kept cutting and cutting the amount of dye and finally got it right in the two skeins on the end (still drying, thus not wound onto pirns yet).  It will be really interesting to see how this works!

I have thought some more about yarn choices for the wedding dress and have decided that the warp will either be 60/2 silk (15,000 ypp) or a 75% silk, 25% cashmere blend at about 6500 yards per pound.  Both are strong enough for warp, are white, and (more importantly) I have enough of each in my stash to do all the yardage for a wedding dress (14 yards for the overrobe, another 12 for the dress).  I do tend to buy in large quantities but it is pretty rare for me to have 26 yards’ worth of anything on hand!

I am still debating whether to sew the dress underneath out of handwoven or commercial fabric.  As there is no immediate urgency to this  project (note that Mike and I are not engaged, therefore there is no wedding scheduled, thus a leisurely course is just fine) I suppose that question can wait for awhile.  I think it would be fun to weave it in an advancing twill heart shape, modeled loosely after the hearts in the Twill Thrills: The Best of Weaver’s book.

Coat-wise, I have done the back interfacing and taped the neckline, and the next step will be sewing it all together.  I have reluctantly abandoned the idea of doing it using Claire Shaeffer’s methods in Couture Sewing, primarily because I don’t have enough experience with coat construction to puzzle things out from her instructions.  Instead I’m using the “custom method” in Palmer & Pletsch’s “Easy, Easier, Easiest” tailoring book, which includes all the hand-sewn details.  I’m reading through Shaeffer and hope to use her methods in the next coat and perhaps in putting in the lining for this coat, but the Palmer & Pletsch instructions are much clearer, so I’m going with them for now.

First, the cool news: Syne Mitchell interviewed me, Claudia, and Alison (my two partners in Weavolution) a few weeks ago, and the interview is now up in the latest Weavecast!  Syne did a fantastic job of editing the interview, so if you want to hear all about Weavolution, go to the latest episode and listen to it.  Way cool!

The poppies turned out to be a washout; the flowers had nearly all faded by the time we  arrived on Saturday morning.  That’s wildflowers for you: ephemeral!  But we did see some beautiful slopes outside the Poppy Reserve that were literally orange with poppies (and gold with the tiny goldflowers), so I don’t feel entirely cheated.

I also got to see a Mojave Green rattlesnake up close and personal! while we were out hiking, so I’m pretty excited about that.  I only got to see the tail end as the front end was buried in some brush, but it was still really nifty to see the sagebrush-green body with bleached markings, and the very distinctive rattle.  I was going to take a photo of it, but decided that would probably be unwise, so after watching it for awhile (from a respectful distance) I went on.

(The Mojave Green rattlesnake, incidentally, is one of the three rattlesnakes that are actually capable of killing a healthy adult human.  The two others are the Eastern and Western Diamondback rattlesnakes, which are just bloody darn huge, and so produce a lot of venom.  The Mojave Green is small, relatively speaking, but is unique (to my knowledge) among rattlesnakes in that it produces a neurotoxic venom, attacking the nervous system rather than the flesh, and hence can kill an adult human.  So while I was really excited about seeing it, I was just as happy not to be seeing the business end.  The tail was quite enough.)

I did, however, get one good shot of a patch of late poppies: 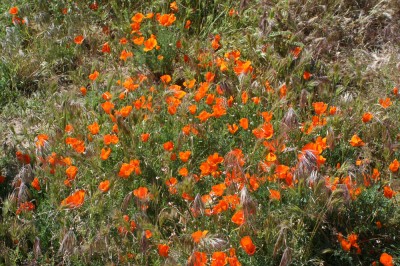 Not as impressive as a shot of an entire field of them, but still, there’s something about California poppies that just makes one happy, isn’t there?  They’re so beautiful, so cheerful, so ephemeral.  A gift from nature.

And, finally, on the way home I finished padstitching the collar:

If you look at the larger view, you can see the tiny stitches.  They go perpendicular  to the roll line in the section below the roll line (the basted line where the collar curves), and parallel to the roll line above the roll line.  These stitches hold the collar stand (the part that sticks up) straight up and holds the fabric in a permanent soft crease so the collar will fall naturally around the neck, later.  (You’ll notice that, even though I’ve flattened it out somewhat for the photo, the stitches are holding a soft fold at the roll line.)

This is all pretty time-consuming, so I’m getting a pretty good understanding of why people went to fusible interfacing once they had the opportunity to do so.   Still, I’m enjoying the process.