You are here: Home / Travels / Cambodia / The Ruins of Angkor / Bas-Reliefs at Angkor Wat

From entrance to center, Angkor Wat consists of a moat, a main gate, a grassy field with two pools (the first two photos in this collection were taken from the north pool), a lower gallery running all around the main building, a middle gallery with four courtyard pools, and the five towers. The lower gallery is covered in bas-relief carvings to a height of six feet, covering over 600 yards of wall. They depict various religious and historical epics.

Again, photos don’t do the walls justice; you have to walk along and *see* the elaborate carvings covering the length of a football field. I’ve picked out some details. Click for the larger photos; the thumbnails are hard to see. 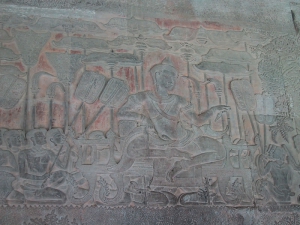 This is from the Battle of Kurkshetra, which pitted five good brothers against a hundred evil ones (guess which side won? ;-) ) Depicted here is a military commander; he has only eight or ten parasols shading him, the king would have many more (15-18). 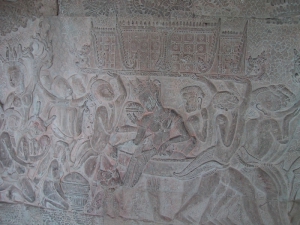 The queen, going to war in her royal palanquin. 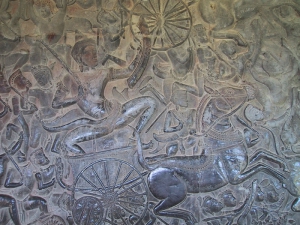 The two armies marching to war. Depicted here is a horse-charioteer. 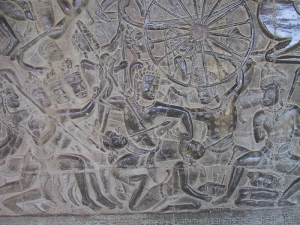 The thick of battle. Here, a soldier grabs his enemy by the hair, the better to skewer him. 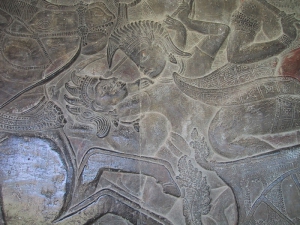 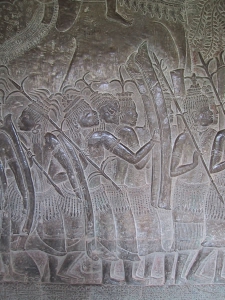 Scene from a different battle; here, a Thai mercenary marches as an ally of the Khmer. 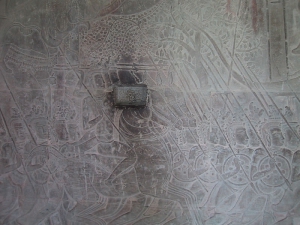 Thailand invaded and annexed the Angkor Wat area. Per our guide, during the occupation, they didn't want it known that they had once worked as mercenaries for the Khmer, so they excised all inscriptions referring to Thai soldiers (thus the hole). 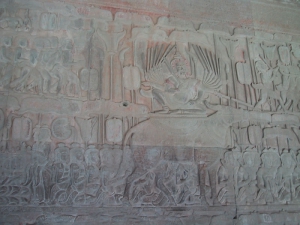 This is part of a vast bas-relief showing the Hindu heavens and hells. Here Yama, eighteen-armed ruler of Hell, rides a buffalo while judging the newly dead. 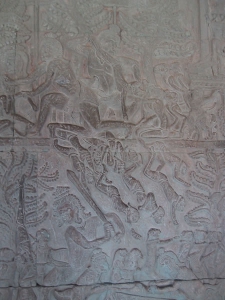 The trapdoor to Hell. In the Hindu pantheon, there are 37 heavens and 32 hells, one corresponding to each of multiple sins.

A sinner being burned alive in a fire in Hell. (I didn't take any pictures of heaven, as it seemed pretty dull and was up higher, harder to photograph.) 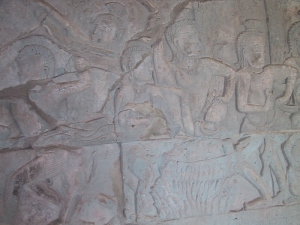 Sinners being put into a pot of boiling water in Hell. (Hindu hell should not be mistaken for the Christian hell; it's probably more akin to Purgatory.) 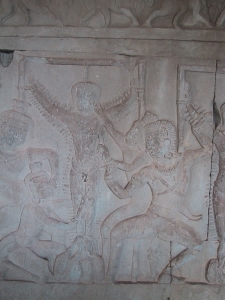 Sinners being driven full of nails in Hell. (As our guide remarked, "They have a lot of fun in Hell.") 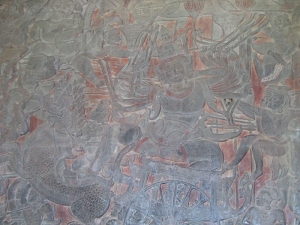 Ravana, king of the giants. He has some large number of arms, and twenty heads (you can see them stacked on one another) 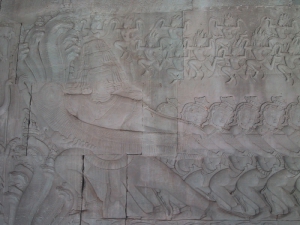 The Churning of the Sea of Milk covers another of the walls of Angkor Wat. The asuras (giants) and the gods team up to pull on the body of the giant naga (serpent) Vasuki, which is coiled around Mount Mandara. This rotates the mountain and churns the Sea of Milk. By churning for 1,000 years, they produce the elixir of immortality--which, of course, promptly precipitates a battle. 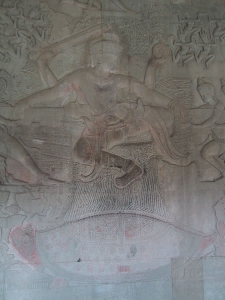 Here is Vishnu directing operations. Below is his turtle incarnation, holding up the mountain as it threatens to sink into the sea during the churning.

(This relief is quite long and detailed--the photos don't do it justice. For example, there are dozens of different kinds of fish depicted, all topsy-turvy as the sea churns.