You are here: Home / Travels / Cambodia / The Ruins of Angkor / The Bayon

The Bayon, the central temple in the city of Angkor Thom, known for its faces and bas-relief carvings.

The Bayon is the central temple of the Angkor Thom compound, and was built by Jayavarman VII and VIII in the late 12th to 13th centuries. It is located in the exact center of Angkor Thom, the symbolic center of the universe. Because Jayavarman VII was a passionate Buddhist and Jayavarman VIII an equally passionate Hindu, it has a combination of Buddhist and Hindu themes. Because of its central location and the fortifications surrounding Angkor Thom, later kings found it easier to remodel the palace according to their own beliefs, rather than reconstruct it. As a result, it has leftovers from many religions

The Bayon is known for its face towers–there were originally 49 of them, of which 37 are still standing. Most have four large smiling faces, but some have three or only two, and the central tower has more (!). These faces are quite large–4-8 feet across.

The other main feature of the Bayon is the bas-relief carvings. There are two sets, one outside depicting scenes from daily life, and one inside, with Hindu religious themes (added by Jayavarman VIII after the death of Jayavarman VII). I took photos of some of the more amusing ones… 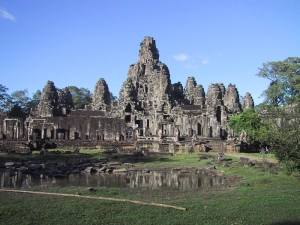 The Bayon. Each of the towers has faces carved into it, usually 4. 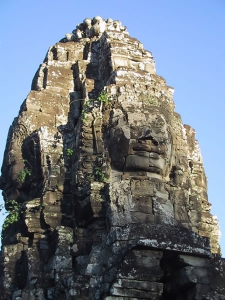 One of the face-towers. (Take a closer look, the faces are overgrown by moss.) 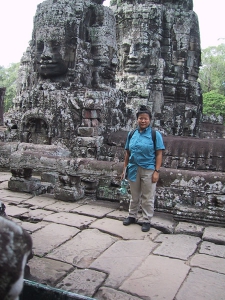 Me by another face-tower. These are farther behind me than you think, about 10-15 feet. 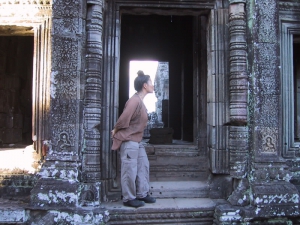 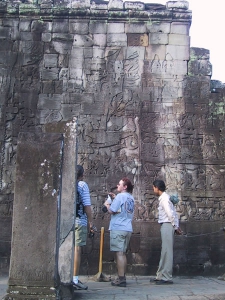 Us gaping at the bas-reliefs (which go about ten feet up the wall), in the outer gallery. 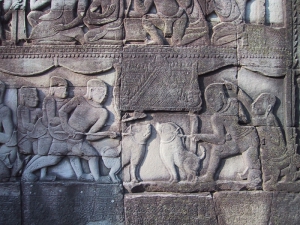 Boar-fighting (notice the bristles along the spine). 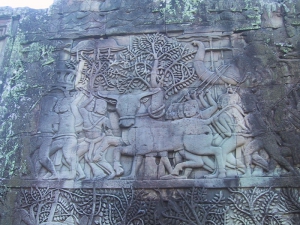 In the words of our guide, "Army win its battle--warriors kill bull, for make party." 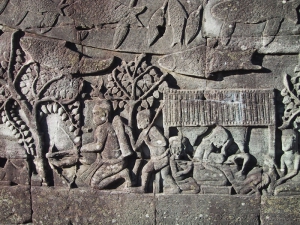 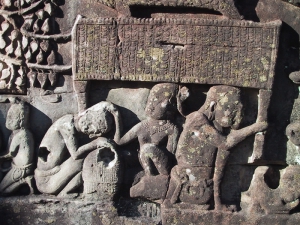 Picking lice out of a friend's hair. 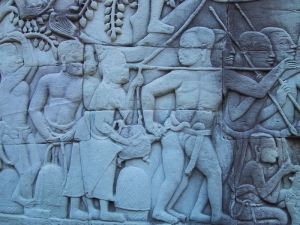 A woman's turtle bites the man in front of her. 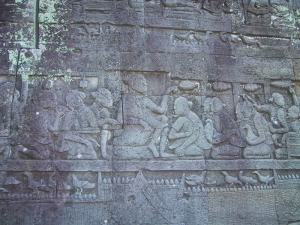 The world's first Chinese restaurant! Here, a customer orders. (You can tell they're Chinese by the hairstyle.) 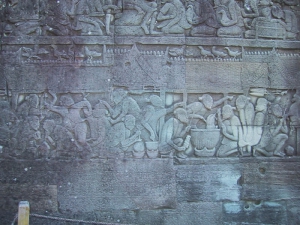 The kitchen of the Chinese restaurant. 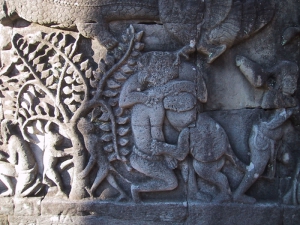 Man being eaten by a tiger (yum!) 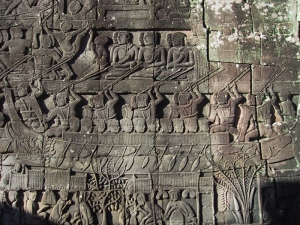 Chams going off to war in a warboat. You can tell they're Chams from the elongated earlobes. 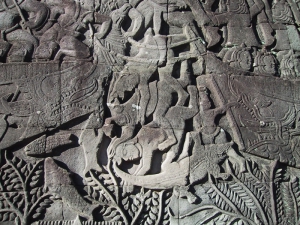 Man falling out of a warboat and being eaten by a crocodile. (They sure had fun in those days...!)