Xi’an, the former capital of China, features not only the Terra Cotta Warriors of Emperor Qin Shihuang (the man who unified the seven warring kingdoms and created modern China) but also some damn good food.

Xi’an was the ancient capital of China until the Mongols moved the capital to Beijing, where it resides today. It has a very well-preserved city wall (we walked around a good portion of it), and nearby is Hua Shan (Flower Mountain). It is also an area known for its dumplings – we went to one of the most famous dumpling restaurants and were treated to a real feast. We also stopped by a lacquer store, where my mom bought me a gorgeous jade carving (see below).

Xi’an is perhaps most famous for the tomb of the emperor Qin Shi Huang, the first emperor of the Qin Dynasty and in fact the first emperor of China! He unified the seven warring kingdoms under his rule and promptly set about two giant public works projects: the Great Wall and his tomb, which together consumed approximately 1/3 of China’s GDP during his reign.

To follow him into the afterlife, Qin Shihuang wanted to bury thousands of soldiers alive in his tomb. His generals, possibly foreseeing mass revolts if he attempted this, convinced him he would need his soldiers alive to defend the country and quell uprisings. Instead, he had over 7,000 terra cotta soldiers made to defend him in the afterlife, each formed with meticulous detail (you can see the well-defined thumbnails on the surviving soldiers!) and painted to be as lifelike as possible. Alas, just a few years after his death, the empire revolted, and the terra cotta soldiers were smashed into bits and forgotten, until in 1974 some peasants digging a well found a shard. Since then it has become one of the most popular tourist attractions in China.

Xi’an was the last stop on our journey before returning to Shanghai…we stayed in the Hotel Sofitel, possibly the most luxurious hotel room I’ve ever had in my life (it was nearly the size of my apartment at home!). It was a real treat. 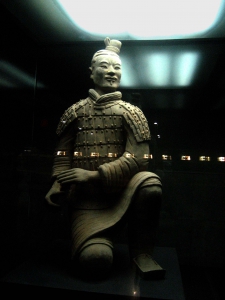 The only terra cotta warrior not smashed by the peasants, in a glass case in the museum. 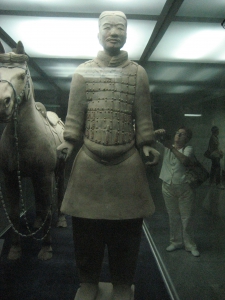 A charioteer. The chariots, made of wood, have long since rotted away, but the charioteer and his horses survived (in pieces) and have been reconstructed. 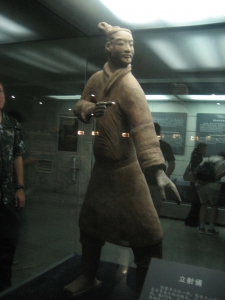 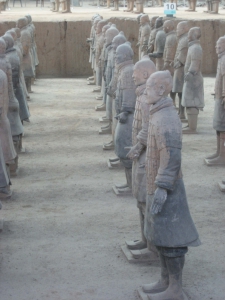 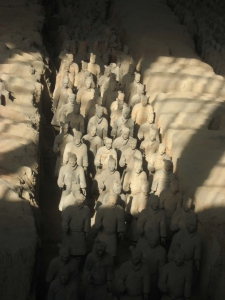 More ranks of the terra cotta soldiers. (Do take a closer look; the thumbnail doesn't do it justice.) 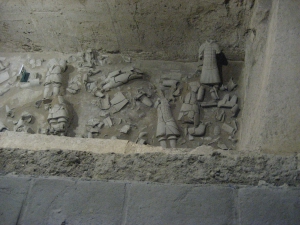 The terra cotta warriors, smashed to bits as they were left by the rebel army. 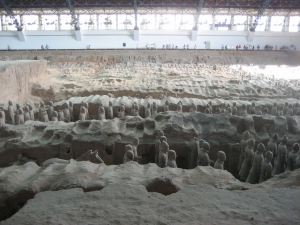 The pits from which the terra cotta soldiers were excavated. 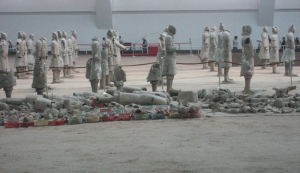 A photo of the reconstruction in progress. I'd say this was the world's largest jigsaw puzzle if I hadn't seen the ruins at Angkor Wat...! 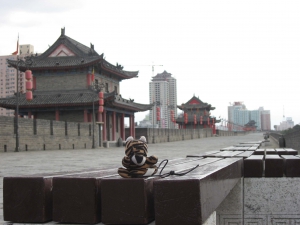 The travelingtiger on the city wall of Xi'an. (Photo courtesy Mike Magin.) 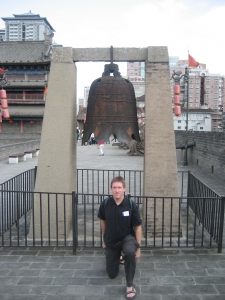 Mike at a gate on the Xi'an city wall. 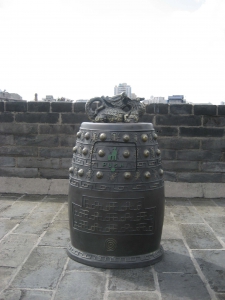 Even the trash cans were beautiful! 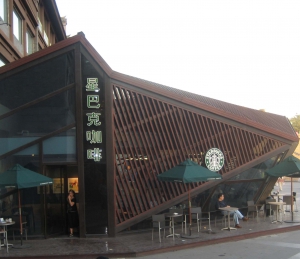 Yes, they really are everywhere. (Take a closer look if you can't figure out what I'm talking about.) 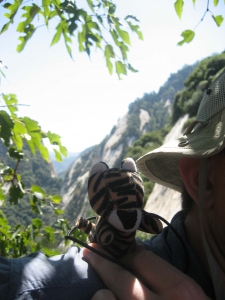 The travelingtiger at Hua Shan 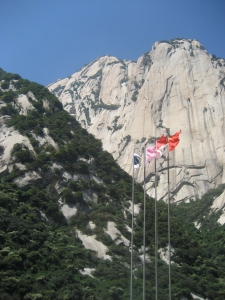 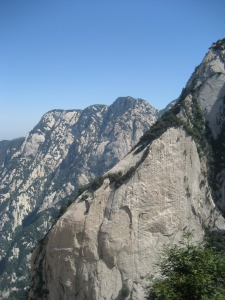 Lots of rocky outcroppings with trees clinging to cracks in the wall... 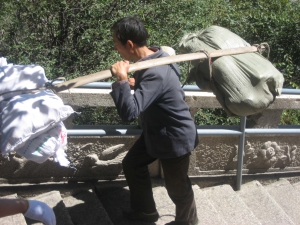 A porter carrying loads up the steps at Hua Shan (still the only way to get stuff up the steps!) 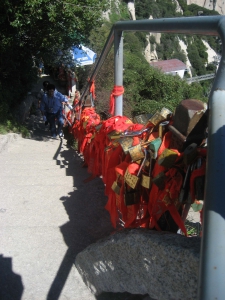 I was puzzled by the sellers of engraved locks until I asked our tour guide. It turns out that the lock is a symbol of love, so a couple climbs up the mountain as far as they feel inspired, then lock the lock onto the chain so the sun and moon can witness their love for each other. Neat! 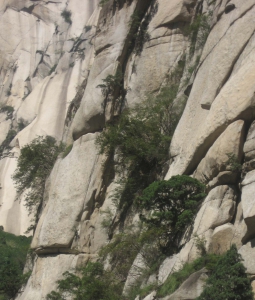 A tree growing out of cracks in the rock on Hua Shan. It's hard to catch the scale of such things in a photo...it looked like a Chinese brush painting (not too surprising, I suppose!)