You are here: Home / All blog posts / Happy (weaving) birthday to me!
Previous post: A pressing problem
Next post: And now what?

Yes, today marks exactly three years of weaving.  On October 20, 2006, I bought and carried home my new-to-me loom, an 8-shaft Baby Wolf…and the rest, as they say, is history.  🙂

A brief survey of the last three years:

This was an advancing twill pattern from the Handwoven Design Collection.  I wrote a very interesting (in-retrospect-amusing!) blog post about my intentions for this project, and they were well and truly realized.  The colors don’t work out well, and I had a few skips,  but remarkably few errors for a first project.  I was quite pleased with it, and still am.  Beginners’ work, but quite nice nonetheless.

Six months later, I was weaving (and blogging) about my Silver Fox shawl: 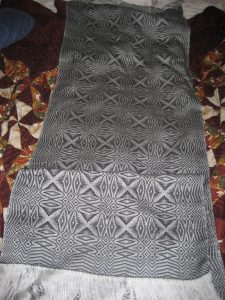 And, exactly seven months into weaving, I was drafting my own pattern, the Tiger Eye Shawl, and buying a 16-shaft computer-driven loom, a Leclerc Diana.

The one-year mark passed unnoticed, as I was (literally!) elbow-deep in chocolate at the time, but a month or two later found me weaving Liquid Fire: 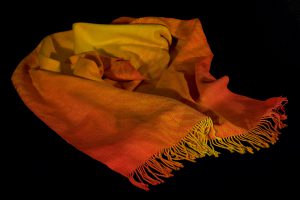 And the 1.5-year mark gave me my first ever weaving award, a silver ribbon at CNCH (the Conference of Northern California Handweavers).

And, at 1 year 8 months into weaving, I traded 16 shafts for 24, selling my Leclerc Diana and trading up to the one I have now, a 24-shaft AVL Workshop Dobby Loom.  At this point I was creating most of my own designs.

And, just past the two-year mark, I wove what is still my favorite piece to date, the Ocean Sunset shawl:

And, at two years and six months, the wedding-dress project was born: 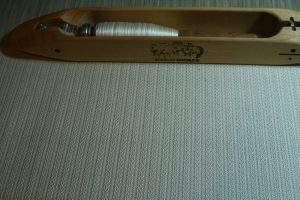 So here I am at three years of weaving, midway through the wedding-dress project, with two articles (one for Complex Weavers, one for WeaveZine) en route to publication.  If I could drink, I’d raise a glass of champagne to celebrate this weaving anniversary!  But as it is, I think I’ll fondle my newly-woven fabric and dream of projects to come.

What do I want from the next year?  Well, fun primarily (life must always be fun 🙂 ), but I’d like to get into a juried show or exhibit of some sort.  Not for the fame and glory, but I’d like to know that my work has reached a level of technical excellence such that my work is worth including in a juried show.  Convergence fashion show would be nice, but  if that doesn’t happen, I might look around for other exhibits to enter.

And now, excuse me.  It’s my (weaving) birthday, you know, and the candles are burning down on the cake…gotta put on my party hat and blow them out!!